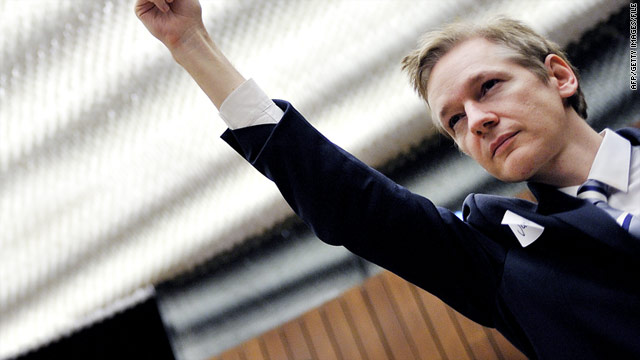 Daniel Domscheit-Berg, one of the founders of Openleaks.org, says WikLeaks founder Julian Assange (above) weakened his own organization.
STORY HIGHLIGHTS

London (CNN) -- Arguing that WikiLeaks founder Julian Assange has "weakened the organization," a newly organized rival to the website known for leaking official secrets says it will launch Monday.

The founders of Openleaks.org say they are former WikiLeaks members unhappy with the way WikiLeaks is being run under Assange.

"It has weakened the organization," one of those founders, Daniel Domscheit-Berg says in a documentary airing Sunday night on Swedish television network SVT. He said WikiLeaks has become "too much focused on one person, and one person is always much weaker than an organization."

In an e-mail to CNN, Domscheit-Berg said the group hopes to launch its site Monday.

Like WikiLeaks, which facilitates the anonymous disclosure of secret information, Openleaks says its goal is to help people deliver material to news outlets and other organizations without being identified. The Swedish daily Dagens Nyheter, citing internal Openleaks documents, reported that the new site intends to act as an intermediary, "without a political agenda except from the dissemination of information to the media, the public, non-profit organizations, trade and union organizations and other participating groups."

Domscheit-Berg said WikiLeaks put "everything we had" into the high-profile disclosures of hundreds of thousands secret U.S. documents over the past five months.

"I think the wisest thing to do would have been to do this slowly, step by step, to grow the project. That did not happen," he says in the SVT documentary.

Assange and WikiLeaks have been the focus of worldwide condemnation since their first major release of classified U.S. documents in July. Since it began disclosing more than 250,000 U.S. diplomatic cables in November, it has been hit with denial-of-service attacks, been kicked off servers in the United States and France and lost major revenue sources.

And Assange has been held in a British jail since Tuesday as he battles extradition to Sweden, which wants to question him about allegations of sexual assault. Assange has denied any wrongdoing, and supporters have called the charges an attempt to strike back him and his organization.

But Domscheit-Berg said, "If you preach transparency to everyone else, you have to be transparent yourself."

"You have to fulfill the same standards that you expect from others," he told SVT. "And I think that's where we've not been heading in the same direction philosophically anymore."

Another former WikiLeaks staffer said he had brought up his discontent with Assange, but that the WikiLeaks founder had not wanted to listen.

"Eventually this ended with me arguing with Julian about basically his dictatorial behavior, which ended in Julian saying to me that if I had a problem with him I could just 'piss off,' I quote," Herbert Snorreson said.

WikiLeaks spokesman Kristinn Hrafnsson would not discuss disagreements between Assange and other members of the organization. But as for the planned launch of a rival group, he said, "the more,the better."

"Well, I'm inclined not to talk too much about the people, the few people that have decided that their interest is not with WikiLeaks anymore," he told SVT. "What I hear is that some of the people are contemplating to open up their own website with the same ideal as WikiLeaks and I think that is an excellent idea and I wish them well."