Blog site Tumblr back after 24 hours 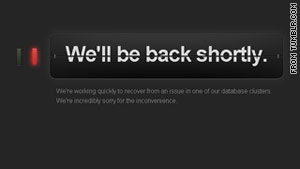 (Mashable) -- Tumblr has returned to the web after a full day's, err, vacation.

The popular blogging/reblogging platform went down yesterday afternoon during some planned maintenance; the exact reasons for the outage are unknown, but Tumblr (Tumblr) has mentioned database cluster issues.

Rumors aside, the downtime had nothing whatsoever to do with a 4chan-led DDoS attack.

The official company blog states a fact of life for any successful startup: Keeping up with at-scale traffic on a startup's budget and infrastructure is hard, hard work, "more work than our small team was prepared for," the blog reads.

In fact, traffic for all Tumblr-powered blogs is in excess of 500 million pageviews per month, according to Tumblr.

Tumblr hopes to focus on infrastructure now; to that end, the New York City-based startup has quadrupled the size of its engineering team in the past month.

We hope these are solid back-end engineers with lots of experience in scalability issues; the last thing Tumblr wants is to reproduce the epic downtime waves of other popular web services that shall remain nameless.

Did Tumblr's downtime over the past day have any impact on you? Do you think Tumblr will continue to struggle as it grows? We'd love to hear about your experiences and opinions in the comments.