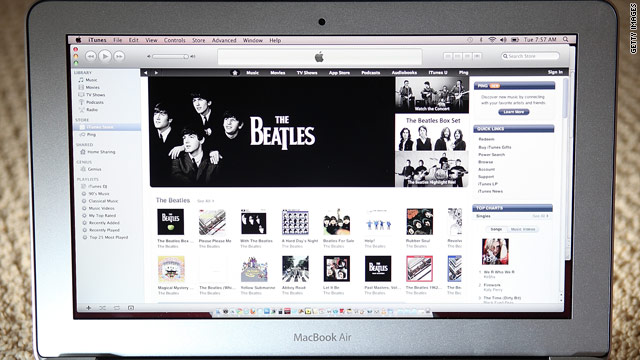 More than 40 years after they broke up, the Beatles stormed the charts of Apple's iTunes online music store.
STORY HIGHLIGHTS
RELATED TOPICS

(CNN) -- Fans of the Beatles on iTunes want it all and they want it now.

Less than an hour after the homepage of Apple's iTunes online store switched to Beatlemania at 10 a.m. ET, "Abbey Road" had already jumped to No. 21 on the album sales spot. Not far behind were the box set -- which contains all the group's studio albums -- at No. 23, "Sgt. Pepper's Lonely Hearts Club Band" at No. 27 and "The White Album" at No. 29.

By 11:20 a.m. "Here Comes the Sun" had become the first Fab Four single to reach the iTunes charts at No. 199. Twenty-five minutes later it had been joined by "Let it Be" and "Blackbird."

After years of rumors and speculation, Tuesday marked the first time the Beatles' digital music was legally on sale.

By early afternoon the Fab Four were taking over iTunes the same way they took America by storm on "The Ed Sullivan Show" in 1964. While Ke$ha and Katy Perry still topped the iTunes singles charts, Beatles songs were steadily climbing.

Think you know the Beatles? Check out this trivia

On the album chart, "Abbey Road" led all other Beatles releases at No. 12, followed by "The White Album" and the box set. Other classics, such as "Sgt. Pepper," the "Blue" and "Red" albums, "Revolver," "Rubber Soul," the "Magical Mystery Tour" and "Let it Be," were close behind.

Overall, the Beatles occupied 15 of the top 50 spots on the iTunes albums chart.

Based on early sales, the longer-haired, psychedelic Beatles were more popular with iTunes shoppers than the earlier, poppier Beatles. Most of the top-charting albums and songs were from 1966 or later.

We'll keep an eye on iTunes this afternoon. We have a feeling the "Glee" Christmas album, Rihanna and other artists who made the poor choice to release albums today will have some serious competition.