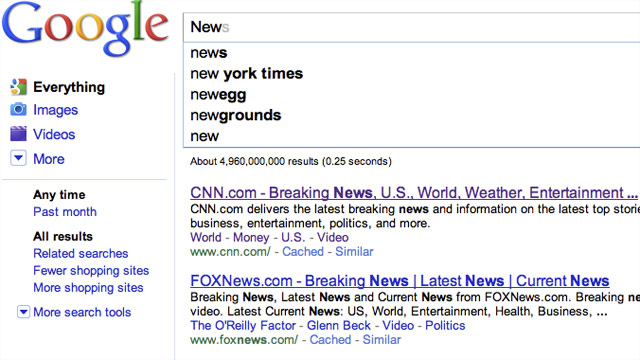 (CNN) -- Tired of waiting the tenths of a second it takes to get Google search results?

The search giant on Wednesday introduced Google Instant, which will give users suggested results before they're even done typing.

"It's not quite psychic, but it is very clever," said Othar Hansson, a senior software engineer at Google.

Using the new system, as a query is typed, the search box immediately jumps to the top of the search page, and a constantly changing list of suggested pages appears. If the user finds the right site, they don't need to finish typing or hit "enter."

Google Instant will begin rolling out on most browsers to users in the United States on Wednesday and be introduced afterward in the United Kingdom, France, Germany, Italy and other countries.

If someone doesn't like the feature, they can disable it from the search page.

At an event at San Francisco, California's Museum of Modern Art, Google executives brought up a local weather report simply by hitting the "w" key.

"The results just stream to you, giving the results that are most likely, given what you've typed so far," said Marissa Mayer, Google's vice president for search products.

"We care a lot about child safety and these kinds of issues," Mayer said. "We had to think a lot about auto-complete and how that works."

Google says the average web search currently takes about 25 seconds: nine second to type it, less than one second for Google to return a result and 15 seconds to pick the best result.

They say Google Instant will shave two to five seconds off of that time.

The company said the newly created actions are not expected to slow down the user's computer.

"Even though we are serving more results pages, the additional load this enhancement creates is very small when compared to other types of web services such as streaming video and online gaming," read a post on Google's blog.

The announcement came after a couple of days of speculation, stoked in part by Google's tweaking of its trademark logo on the search page.

Visitors to the U.S. version of Google's search page early Wednesday found that its usual multicolored logo had turned gray. But with each keystroke in the search box, one letter got its color back.

This "doodle," as it's called by Google staffers who tweak the search-page logo to commemorate holidays and other special events, came a day after the logo was animated to disintegrate into colored balls or dots.

The update-as-you-go design seemed to foreshadow the real-time results, which Google was reportedly testing last month.

Google stayed tight-lipped until Wednesday's event, but certainly worked to gin up interest in the announcement.

"Our doodle is dressing up in its brightest colors for something exciting coming very soon," the company wrote on its Twitter feed shortly after midnight Wednesday.

According to analytics company Experian, in July, Google was responsible for about 71 percent of all Web searches, followed by Yahoo with about 14 percent and Microsoft's Bing with just under 10 percent.

The feature initially will work only on the google.com homepage. It is expected on mobile devices soon and for built-in search boxes on browsers like Google Chrome in the next few months.

It will require users not on the google.com domain to sign into their Google accounts.