How to 'undo' an ill-advised Gmail message 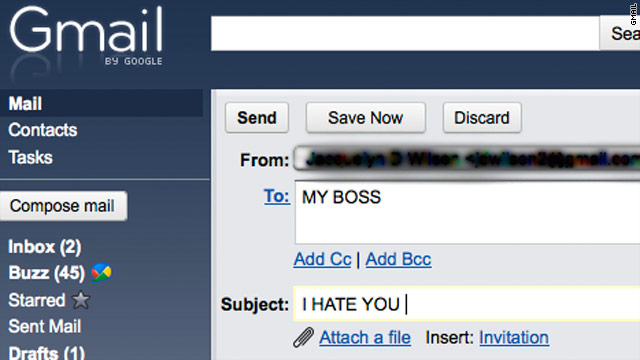 A little-known Gmail feature now lets you take back an ill-advised message up to 30 seconds after you hit "send."
STORY HIGHLIGHTS
RELATED TOPICS

(CNN) -- Ever have that sick-to-your-stomach, "Oh crap!" moment after sending an e-mail?

Did you get immediate second thoughts about that e-mail rant to your ex? Was that blistering message supposed to be about your boss -- not to your boss?

Well, at least with Gmail, there's something you can do about it.

The ability to "undo" an e-mail has been a little known feature of Google's e-mail service since last year. But in the past few days, it appears to have been improved.

Google Operating System, an unofficial blog that shares Google news and tips, noted this weekend that a user now has up to 30 seconds to take back an unfortunate message.

In reality, the feature doesn't actually pull back an e-mail that's already gone, it simply holds your message for 30 seconds before sending it out -- just in case you change your mind.

A Google spokeswoman confirmed Monday that the 30-second option was added early this month.

When the feature first rolled out in March 2009, you had to be super-quick to use it. It only allowed five seconds to take a message back.

Enabling the feature is a bit complicated if you're not familiar with Google Labs, the place where the company lets users test out experiments with Gmail and other Google projects.

And it's worth noting that, because it is a testing space, anything in Labs is subject to change.

But, at least for now, here's how to avoid instant e-mail remorse.

1. Log in to Gmail and go to Google Labs. If you've never gone to Labs before, click the word "more" in the very top left corner, then scroll down and click "even more."

2. In the column on the right, click "Labs." It's next to the icon of a beaker filled with green stuff.

3. Click "Gmail Labs" in the column on the right.

4. Scroll down almost all the way to the bottom until you see "Undo Send." Click "enable" and the feature is now on. Then scroll the rest of the way down and look in the bottom left corner for the "Save Changes" box. Click it.

5. Now, go back to the main Gmail page and click "Settings" in the top right. You should also see your green Labs beaker icon there now -- this will let you go straight to Labs from now on.

6. Scroll down to "Undo Send" -- it should be right above "My Picture." Your default should be set to 10 seconds. But you can use the drop-down bar to stretch that to 30 seconds.

7. Scroll down and hit "Save Changes."

8. To undo an email, just look for the box at the top of the screen that will have the words "Your message has been sent." After that, you should see the "Undo" option. Click that and you'll be sent back to the e-mail's draft form, where you'll have 30 seconds to edit or delete it before it goes out.