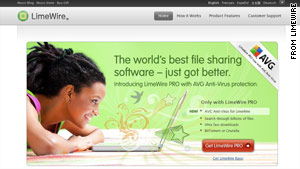 The RIAA now proposes that the judge shut down LimeWire and forbid the service from distributing its software or running advertising.
STORY HIGHLIGHTS
RELATED TOPICS

(ArsTechnica) -- The RIAA has asked the federal judge overseeing the LimeWire case to slap a permanent injunction on LimeWire until it can clean up its copyright troubles to the labels' satisfaction.

"It is patently obvious that the rampant illegal conduct that LimeWire intentionally induced, and for which it has been adjudged liable, will continue uninterrupted day after day unless and until the Court issues an injunction to rein in this massive infringing operation," says the recording industry's request.

LimeWire was found liable for massive copyright infringement a few weeks back. Judge Kimba Wood's ruling cited internal LimeWire documents showing a knowledge of all the infringement taking place through LimeWire's software -- and little done to stop it.

"In the weeks since this Court's Order, what has LimeWire done to try to halt or limit the infringement it has induced?" ask the RIAA lawyers. "The answer, from all appearances, is nothing."

The RIAA now proposes that the judge shut down the service and forbid LimeWire from distributing its software or running advertising. For the service to reopen, LimeWire would have to show that it has addressed the infringement issues and implemented a robust content filtering system to prevent successful searches for material that infringes copyright. Another federal judge recently ordered P2P search engine isoHunt to implement a similar content filter based on "warez words" like "jaybob" and on movie titles. LimeWire would apparently need something similar for music.

Such a move would probably make the service useless to most of LimeWire's existing users, who are legion. In 2008, LimeWire boasted that 4 million unique users logged on via the official client. The RIAA says that, over the past couple of years, the LimeWire client has been downloaded over 200 million times from download.com.

What about monetary damages? They will come later. If past cases are any indication, LimeWire could well be forced out of business by the damage award (unless it can overturn the liability ruling on appeal).

"We feel a permanent injunction is not the best course of action. It could hold back the creation of new digital music technologies that LimeWire is in the process of developing and does not benefit the industry as a whole...

"Moreover, we continue to remain focused on our future product, which will give users boundless music portability and compatibility. We can confirm that in our ongoing dialogues with numerous industry executives, this service has been very well received."