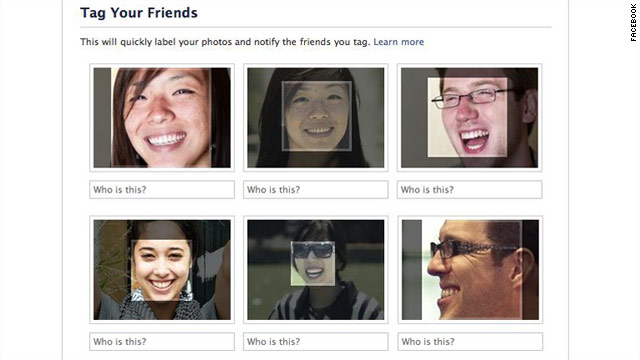 (Mashable) -- Facebook Photos, one of the social network's most popular features, is getting a big and potentially controversial upgrade with a new feature that automatically suggests who users should tag in photos based on facial recognition technology.

The new feature, Tag Suggestions, will begin rolling out to U.S. users next week, according to Facebook Vice President of Product Chris Cox.

He told us that the product utilizes technology that was built in-house, as well as some technology that came from partners. Cox did not disclose the partners Facebook worked with for Tag Suggestions, although we have our suspicions.

Tag Suggestions is fairly straightforward. Whenever you're offered the chance to tag groups of your friends in an album, Facebook will utilize its facial recognition technology to group similar faces together and automatically suggest the friend you should tag them with.

Facebook fills in the "Who is this?" box with its suggestion -- all you have to do is click the "Save Tags" button to accept.

Cox says that suggestions will only appear when its algorithms have "high confidence" of who's being suggested. Unlike Face.com, Facebook doesn't reveal its certainty level and wouldn't reveal what percentage actually correlates to "high confidence."

The social giant is also preemptively addressing the potential privacy issues that will be brought up from automatic, algorithmic tagging. Users can opt out of Tag Suggestions by going to their privacy settings and disabling the "Suggest photos of me to friends" feature.

This release is part of a bigger effort to upgrade Photos. Earlier this year, Facebook launched a slew of upgrades, including bigger thumbnails, group tagging and drag-and-drop photos.

This may be the biggest upgrade for Photos yet, though. Photo tagging is considered a chore by many users, yet it is the company's most popular product.

"Photos are by far the most engaging content Facebook has ever had," Cox told us earlier today.

By vastly simplifying the tagging process, Facebook expects that its millions of users will tag more photos, which will create millions of new engagement points and social connections, making it that much more addicting.