The 'Path' to better online friendship? 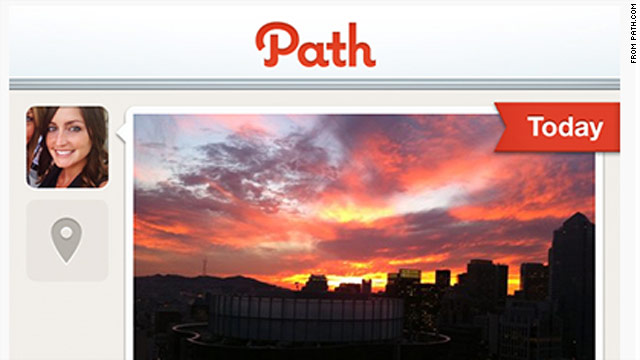 (CNN) -- If you're sick of tempering Facebook photo captions so they won't offend ex-boyfriends, in-laws and far-flung high school classmates, then you may want to check out the new photo sharing site called Path.

Unlike Facebook and Twitter, which tacitly encourage users to round up as many friends as they can, Path places a limit on digital friendship: Users can be friends with only 50 people on the site.

Compare that to Facebook, where the average user has 130 friends, and where power users tend to run in posses of at least 1,000.

On Twitter, which is arguably more sprawling, online celebrities like Ashton Kutcher -- who is backing Path financially, according to The Wall Street Journal -- have more than 1 million "friends." (Kutcher is actually up to 6 million followers at this point.)

Path's 50-person limit is backed by social science, according to an introductory blog post from Dave Morin, the site's founder and a former Facebook executive.

"We chose 50 based on the research of Oxford Professor of Evolutionary Psychology Robin Dunbar, who has long suggested that 150 is the maximum number of social relationships that the human brain can sustain at any given time," Morin writes in the post.

"Dunbar's research also shows that personal relationships tend to expand in factors of roughly 3. So while we may have 5 people whom we consider to be our closest friends, and 20 whom we maintain regular contact with, 50 is roughly the outer boundary of our personal networks.

"These are the people we trust, whom we are building trust with, and whom we consider to be the most important and valued people in our lives."

That's a lot of math, but you get the point: Having fewer friends, and closer friends, means you're theoretically able to be yourself more on Path -- without fear that someone will get the wrong message from your photos or will interpret your sarcasm incorrectly.

For now, Path is available on the web and as a free app for the iPhone. Morin writes that other smartphones will be supported later.

The app formally launched on Sunday.

Path is backed by some big-name Silicon Valley investors, and several websites say photo sharing apps are the hot investment in the tech world right now.

Still, that means Path has a host of competitors. Flickr, a long-standing favorite in the professional photo community, has a robust app. A new app called picplz is getting buzz because it lets users edit photos and then post them to three major social networks: Facebook, Twitter and Foursquare. And Facebook is the largest photo sharing site on the web, arguably because that all-purpose site makes it really easy to share photos with as many people as possible. Facebook has also introduced controls to allow users to share photos and status updates with only a select group of their friends.

Some new users to Path have found it confusing.

On a comments thread on the site, one user wrote, "I don't know what to do." At least 20 people clicked that comment to indicate they had the same problem.

What seems to set Path apart is it's anti-share-with-everyone philosophy, which is a big pivot from what most of the web companies these days are doing.

"Path is a place where you can be yourself," the intro blog post says.

The post adds: "On Path, you always control who you are sharing your personal moments with. We know that if you are sharing with a single person you do not trust, you will not feel comfortable sharing. So we've built the personal network model to keep you in control, always."