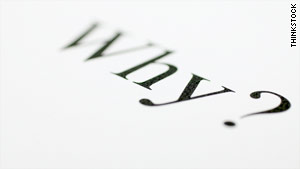 Why can't people take a second extra to add the punctuation at the end of a sentence?
STORY HIGHLIGHTS
RELATED TOPICS

Editor's note: Brenna Ehrlich and Andrea Bartz are the sarcastic brains behind humor blog and book Stuff Hipsters Hate. When they're not trolling Brooklyn for new material, Ehrlich works as a news editor at Mashable.com, and Bartz holds the same position at Psychology Today.

(CNN) -- Way back in those scary days of high school biology, musty textbooks taught us that the human ovum is about the size of the period at the end of this sentence.

The statement highlighted that, in the absence of decent birth control, something very teeny could have a massive impact, eventually mushrooming into a 240-pound bro flailing his arms, hooting frequently and ordering unwanted Jager bombs for the whole table.

Likewise, the actual period at the end of a sentence can have a huge impact -- all punctuation marks can.

Since commas, periods, et al. are the only hints you can give your reader about how he should hear your e-mail (or Facebook message or Match.com note) in his head, you best be sure you're giving accurate (and minimally offensive) stage directions every time your fingers hit the keyboard.

To be clear, we're not just talking about common grammar mistakes. Yes, as Lynne Truss and any literate, educated VIP will tell you, no decision-maker (or potential sig o.) is going to take you seriously if you can't figure out how to use a semicolon in your cover letter or flirtatious hello.

(It's really not that hard; you're just separating two complete sentences that don't quite demand a full stop in-between. Here's that explanation again, with pictures and no big words.)

But we're skipping that, because there are tons of ancient but completely serviceable guides freely available to help you properly pepper your sentences.

What we're really focusing on here are the subtle punctuation pockmarks -- the typing quirks that leave the readers of your missives feeling quietly miffed or with a lower appraisal of your character.

Here are three subtle slurs -- let's call them "mark misdeeds" -- that you need to watch out for like a particularly obsessive hawk.

The mark misdeed: Total ellipse of the heart

Looks like: "You could come over for dinner tomorrow...we're making that casserole with the cheese puffs on top...not sure if Hector will be out of his Mystery Science Theater 3000 fan club meeting in time to join us...but you can come if you want..."

Read as: "I'm just a little afraaaaaid [pause] of making strong declarative sentences 'cause liiiiike [pause] I'm not really sure how I feel about anything I'm saying? ...Or maybe I'm just a bobble-headed fool..."

The dot-dot-dot is the written equivalent of a dramatic, blank-eyed shrug. In other words, it's infuriating.

It's an invitation to "read between the lines" or "fill in the blanks," often suggesting blame ("Well, you didn't exactly make it sound like you wanted to come..."), an annoying attempt to beat around the bush ("The sawdust, paint and floss installation art exhibit was fine..."), or the implication that a big honking tornado of badness crouches in waiting after the third period ("We'll talk about this later...").

So man (or woman) the heck up. Directness beats passive aggression any day. And besides, it feels pretty good to just outright admit that the "avant garde" gallery show (appropriately named "Flossy Flossy") just, well, sucked.

Looks like: "I got the contract -- thanks for sending. I'll ask Marcia about it -- she should be back this afternoon. Remind me to tell you her latest snap of that ugly cat of hers -- who the F has blue, kitty-fur-laden shag carpeting on their stairs?"

When did we all become so enamored with m-dashes?

Years ago, we sampled the alluring, suspense-laden pause when the colon, semicolon or period just didn't hit the right note.

Now we're using it in scads, turning the experience of reading an e-mail into one akin to a herky-jerky rickshaw ride through an especially cratered Tokyo alley.

My former journalism teacher's rule: No more than two m-dashes in a paragraph. To that I add: No consecutive m-dash harboring sentences. Break. It. Up.

(Ruhl quick, let's talk about how an m-dash should look. The rule is, if your word processor doesn't have a special symbol for da dash, you can write two hyphens with a space on either side of the pair -- like this. But shut up, your word processor totally makes m-dashes. Option-shift-hyphen does the trick on a Mac; Windows in its brilliance has no easy shortcut, but automatically modifies a double-dash between words. Substituting single hyphens just makes you look stupid.)

Read as: "I'm irritated and/or too busy to be bothered with whatever you're talking about right now."

Skipping a closing period is a small but calculated slight -- it suggests a power mismatch, since the person you're replying to took the time to punctuate matters while you can barely muster the care to complete a

Yeah, that hurt, right? Finish your darn thoughts. Even if you're on your smartphone, the closure is a worthwhile half-second investment.

Chat services and text messages are an exception, but if you're choosing to respond to an e-mail, the least you can do is wrap things up. (I'd go so far as to suggest the .8-second "Thanks." but don't want you to blister your finger pads or anything.)