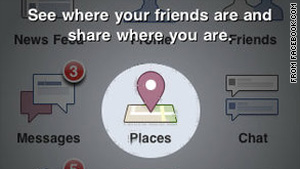 Facebook executives on Wednesday announced the launch of Facebook Places, which -- similar to services such as Foursquare and Gowalla -- will allow people to use the GPS on their mobile phones to let friends know exactly where they are.

Users who wish to announce their location to their friends on Facebook would tap a "check in" button to see a list of places nearby, and then choose the place that matches where they are.

"After checking in, your check-in will create a story in your friends' News Feeds [on Facebook] and show up in the Recent Activity section on the page for that place," Places product manager Michael Sharon wrote on Facebook's blog.

What do you think of the new feature?

Facebook staff also said the feature will be useful not only to let friends know where they are, but also to learn if their friends are nearby at the same time, and to write down what they are doing at the location and what they think about it -- creating a trail allowing friends to see what the writer did there days or even years ago.

When users check into a place, they also can "tag" any Facebook friends who are with them, essentially letting other friends know that the person is there, too. To cut down on the potential for users to falsely tag friends to a place, people can tag friends only if the taggers themselves check in to the location, too.

First, check-ins will appear only to users' Facebook friends as a default, and users can further trim the recipients list to specific friends. Users also can remove check-ins by phone or web at any time, Sharon said.

Facebook said it would make Places available in other countries and on more mobile platforms soon.

Facebook staff said the company planned to let Foursquare, Gowalla and other services enhance their current integration with Facebook. Executives with Foursquare and Gowalla were at Wednesday's announcement in Palo Alto, previewing plans to ramp up how their users will announce their locations on the social-networking site.

The past year has seen big growth in the relatively new mobile check-in space.

Foursquare, which essentially made its debut in 2009 at the South by Southwest Interactive festival in Austin, Texas, was one of the combatants in a so-called "Location War" at this year's festival, going heads-up with Austin-based rival Gowalla.

Since then, Foursquare has become the clear favorite of the two -- and a darling of tech media, even as it looks for ways to turn a profit. Boasting a half-million users at the start of SXSW, Foursquare doubled that in about a month then needed only another three months to hit 2 million last month.

On mobile apps like Foursquare, users "check in" at restaurants, bars, movie theaters or just about anywhere else they visit. The idea is twofold -- to let friends know what you're up to, while racking up points and earning virtual badges in the application's gaming element.

The New York-based Foursquare has begun forging some corporate partnerships and some businesses have started offering discounts and other deals for users who check in frequently.

Facebook, with its half-billion users, represents a massive potential user base for Places.

CNN's Doug Gross and Jason Hanna contributed to this report.