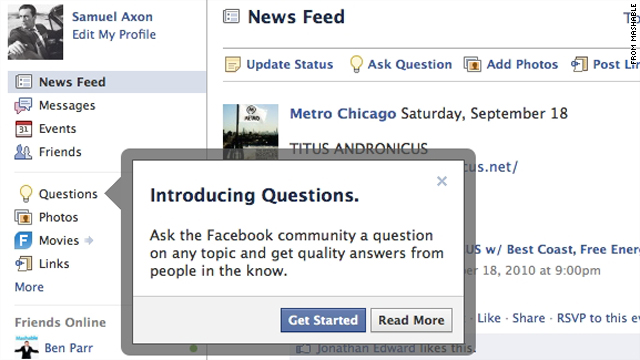 (Mashable.com) -- Facebook has begun the rollout of a new feature, Facebook Questions, which will allow users to get answers to their queries from the entire Facebook community.

Similar in concept to Yahoo! Answers, Quora and Mahalo, Facebook Questions gives users the opportunity to ask questions just by clicking the "Ask Question" button on the homepage. Questions is also available on friends' profiles just as you would post on someone's wall.

We first learned of Facebook's Q&A feature two months ago, when the company started asking for volunteers to beta test the product. The world's largest social network even went so far as to promise beta testers a trip to Facebook's offices to meet with the Q&A team.

I had the chance earlier today to discuss the new feature with several Facebook employees. Questions has several defining features:

• Photo questions: For example, if you take a picture of a bird, but don't know what species it is, you can post the picture on Facebook Questions and get your answer.

• Polling: If you're simply looking for the answer to "Which city is better: Chicago or Dallas?", you can get your answer by creating a poll.

• Tagging: The company seems to be placing a lot of emphasis on tagging questions based on category or topic. The goal seems to be to make Q&A discovery an easier and faster process by making it simple to look up questions on cooking, photography, San Francisco or a variety of other topics.

• Following: You can follow specific questions for updates and new answers.

• Updated homepage: Facebook Questions does actually change the homepage, adding a new bar at the top of the page where you can choose to update your status, ask a question, add photos, or post a link.

There was one more thing that Facebook made clear to me: Facebook Questions is not an advertising product. While brands with Facebook Pages will eventually be able to answer questions, it's not meant to be a promotional platform; it's meant to be a useful and insightful product for users.

Facebook Questions will roll out to a limited group of beta testers today, but the company promises to "bring this product to all of you as quickly as we can." The entire feature is public, so we don't suggest posting those awkward bedroom questions on Facebook.

Will Facebook Questions prove to be more useful than Quora or even Twitter as a Q&A platform? We think so, if only because it has the biggest advantage of them all: 500 million users.