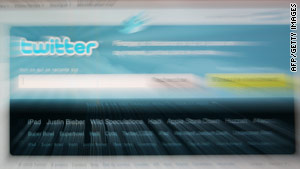 (CNN) -- Twitter is testing out a new feature that would help users find others who share their interests.

Presumably, someone who follows lots of the same feeds you do has similar interests and may be worth a follow themselves.

News about the possible new feature snuck out last night when Twitter developer Nick Kallen tweeted on his account that it was being tested. He said that 10 percent of Twitter users have the feature enabled.

In a later post, Kallen, answering a question, said that 100 percent of users had the feature for about five minutes for testing purposes.

CNN.com didn't immediately find anyone inhouse who had the feature Thursday morning. But social-media blog Mashable posted some screen grabs.

The feature would appear as a thin rail above a user's normal "following" field.

Adding the feature would mark a bit of a turnabout in Twitter's catch-me-if-you-can relationship with social networking titan Facebook.

The change would be part of an ongoing effort by Twitter to further engage users with each other, instead of just passively reading other people's tweets. Most notably, CEO Evan Williams in March announced plans for @anywhere, a feature that integrates Twitter with other websites and lets users comment on each other's activities without having to visit Twitter.

On Thursday, Twitter rolled out version 1.1. of @anywhere for the websites that are testing it, with what it called "performance, security and stability" improvements.

There was no suggestion of a possible rollout date for "You Both Follow" -- if it eventually gets rolled out at all.