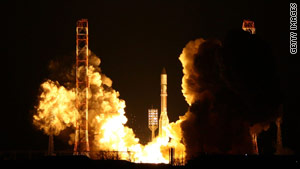 (CNN) -- A rogue satellite is floating through space, threatening to push into another satellite's orbit and interrupt cable TV programming in the United States.

But the company that owns the satellite says they've known about the problem for more than a month and that the impact on cable TV will be minimal.

Galaxy 15, a satellite that catches cable signals and beams them back to Earth, broke loose from its orbit and began a slow, out-of-control drift at about a tenth of a degree per day, according to its owners, communications company Intelsat.

At that rate, the satellite will be close enough for its signals to interfere with the other satellite's signals beginning May 23.

But Dianne VanBeber, a spokeswoman for Luxembourg-based Intelsat, said media reports over the past day or so have drastically overstated the potential impact on television viewers.

"The reality is it's not quite as sexy as it sounds," she said Wednesday. "If we did absolutely nothing, it would create confusion ... [but] we're working with the limited number of customers that are on that satellite and taking active steps to make sure any interference is limited or completely avoided."

She said the chances of avoiding perceptible interference are "pretty good." If there is interference, it would last for hours, not days, she said.

Yves Feltes, a spokesman for SES World Skies -- which owns the other satellite -- issued a statement saying his company is "doing our utmost in order to mitigate any interference into any of our traffic in close coordination with our customers and our competitor Intelstat."

Neither company would comment on which cable TV providers or channels might be affected by any interference between the orbiting satellites. The two satellites will not crash into each other, the companies said.

VanBeber said Intelsat lost control of the satellite, which was launched in 2005, during a solar storm on April 5. At that time, they announced the problem and began moving customers to another satellite, Galaxy 12.

Recent media reports, including a story from The Associated Press, were apparently prompted by an industry publication updating the story, she said. It prompted such dramatic headlines as "Zombie satellite terrorizes the stratosphere" and "Solar storm creates killer zombie satellite."

But VanBeber said there's no reason to scramble a team of space cowboys to blow up the satellite before chaos ensues.

"It's a very stable, predictable path," she said. "It's not out of control. It's not going to race into the Earth."

VanBeber said that Intelsat is the world's largest user of cable satellites and SES World Skies, based in the Netherlands, is second.

"It's a weird thing to say, but it couldn't have happened to two better companies because we're both very well equipped to deal with these kinds of technical issues," she said.