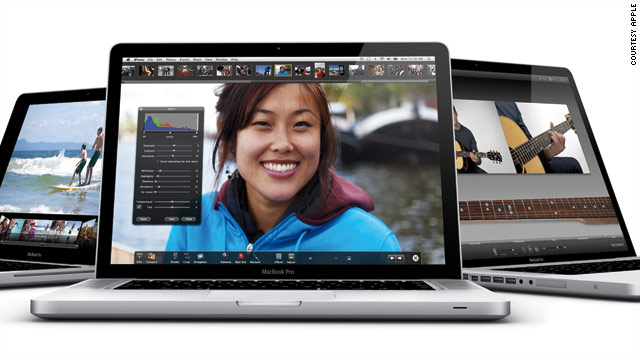 (CNN) -- Apple would like you, if just for a moment, to forget about the iPad.

The company on Tuesday rolled out its newest MacBook Pro laptops, promising faster processors and longer battery life while reminding folks that machines can specialize in areas the much-hyped slate computer doesn't.

The upgrades had been widely anticipated, coming more than 300 days since the line was last refreshed.

Apple tends to update more frequently than that. And many Mac enthusiasts had been clamoring for Intel's new Core i5 and i7 processors, which the 15- and 17-inch models include.

Apple says the 13-inch has a "groundbreaking" built-in battery that can go 10 hours without recharging and a graphics processor they say is 80 percent faster than the current model's.

The 15- and 17-inch Pros are up to 50 percent faster than current models, Apple says.

"The new MacBook Pro is as advanced on the inside as it is stunning on the outside," Philip Schiller, Apple's senior vice president for worldwide marketing, said in a written statement. "With faster processors, amazing graphics and up to three more hours of battery life, the new MacBook Pro delivers both performance and efficiency."

All three are now available through the online Apple Store -- which was down for a few hours Tuesday morning, telegraphing the widely anticipated update -- and at authorized Apple dealers.

Prices are as follows:

There are built-to-order options on all of the notebooks, for an additional cost, of course.