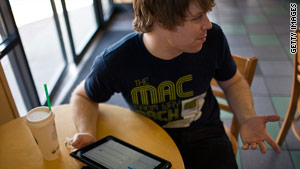 Chip Hanna uses an iPad in Fort Worth, Texas. Apple says the iPad has trouble with Wi-Fi signals "under certain conditions."
STORY HIGHLIGHTS

(CNN) -- Apple is acknowledging complaints that its new iPad computer has trouble connecting to the Internet.

And it's offering some possible solutions.

"Under certain conditions, iPad may not automatically rejoin a known Wi-Fi network after restart or waking from sleep," Apple said in a post on its technical support site late Tuesday.

The post came after a day in which a growing number of people who bought the computer over the weekend said they weren't able to get a Wi-Fi connection or that the connection kept getting dropped.

The iPad, a touch-screen, tablet-style computer that occupies digital turf somewhere between a laptop and a smartphone, went on sale Saturday.

Apple said this week's connection problems can happen with third-party Wi-Fi routers that are dual-band capable if more than one network has the same name or someone had different security settings for the different networks.

The company suggested users create separate names for different Wi-Fi bands and make sure that multiple networks have the same security settings.

The company also advised users to make sure they are using up-to-date wireless router software.

Some said that other wireless devices were working fine at the same spot where the iPad was failing. Several, on a message board on Apple's support site, said laying the iPad on a flat surface made the problem worse.

Apple did not respond Tuesday to a request from CNN.com about the complaints or immediately respond to an e-mail Wednesday morning asking about the proposed solutions.