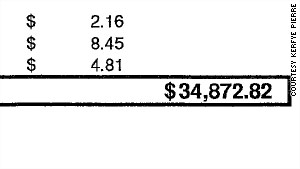 Kerfye Pierre got this mobile phone bill earlier this year. She says T-Mobile forgave all but about $5,000 of the charges.
STORY HIGHLIGHTS
RELATED TOPICS

(CNN) -- Kerfye Pierre had recently returned from volunteering in the aftermath of January's Haiti earthquake when she got the most outrageous mobile phone bill of her life.

"I was like, 'That cannot be possible,' " the 27-year-old Washington woman said of the moment she saw that staggering monthly statement from T-Mobile. "And I called them and they were like, 'Yeah, that's your bill.' "

To make matters worse, Pierre said, T-Mobile had agreed to grant her and other people in Haiti a temporary free voice plan. As she understood it, the plan would let her use her mobile phone for free while she was working in the country, setting up day camps for kids and distributing water to victims of the quake.

As it turned out, she said, the break from T-Mobile only applied to voice calls from her mobile phone. The texts she sent to family members in the United States -- telling them she had lived through the earthquake, which killed 220,000 people -- and the Facebook messages she sent to friends for similar reasons were not covered.

"I would be OK to pay for it if everything was disclosed, and I knew upfront that, if I used this part of the service [data and texts], I would be charged," she said, noting that text messages could be sent and received in the aftermath of the disaster when voice calls would not go through. "But I did not know."

A T-Mobile spokeswoman said customers in Haiti generally were made aware that the free plan only covered voice calls. The company has since forgiven some of Pierre's debt, but she says she still owes about $5,000.

Stories such as Pierre's are part of the reason the U.S. Federal Communications Commission this week plans to propose rules to prevent mobile phone "bill shock," a term that refers to bills that are higher than usual because of unanticipated fees and overage charges.

The rules will be discussed Thursday at an FCC meeting and then opened to public comment. After the comment period ends, the commissioners would have to vote on the proposed rules before they could become law.

The proposal will include requirements that mobile phone companies alert customers if they are about to rack up abnormal fees, such as those charged for sending too many text messages or downloading too much data. The alerts, which could be sent via text messages or voice mail, would allow consumers to stop sending texts or using the mobile internet before they incurred unexpected fees, said FCC Chairman Julius Genachowski.

"Those kinds of alerts right now are the exception, not the rule," Genachowski said in an interview with CNN.com. "We want to make sure consumers are empowered with the information they need to make the market work and control their monthly bills."

Mobile phone users who want to disable their ability to send texts or data after they have used their monthly allotment may also be able to demand that service under the upcoming proposal, he said. The FCC proposal also would set up alerts for international roaming charges and would require phone companies to publicize the ways consumers can track their phone use and avoid fees.

The debate over bill shock comes soon after the FCC announced it was investigating Verizon Wireless for about $50 million in "mystery fees" it erroneously charged to its customers over several years. Verizon said it is rebating those fees on upcoming bills and will send refund checks to former customers. Genachowski declined to comment on that investigation.

While mobile phone bills that amount to tens of thousands of dollars are certainly the exception, "bill shock" appears to be a relatively common occurrence.

An FCC survey conducted in April and May found one in six mobile phone customers has experienced some degree of bill shock -- and nearly half of those who had been surprised by their bills were hit with charges of $50 or more.

He added: "I think we can significantly reduce the volume of complaints, and I imagine that as we shine more light on this issue companies will work with us to develop rules that put in place basic alerts."

CTIA, a trade group that represents the four major mobile carriers in the United States, however, opposes the regulations. The group said wireless companies already offer consumers ways to find out how much data, texts and voice service they've used -- and continues to develop new tools in that regard.

"We agree with the FCC that the goal is to keep all customers happy, but we are concerned that prescriptive and costly rules that limit the creative offerings and competitive nature of the industry may threaten to offset these positive trends," the group said in a statement e-mailed to CNN.

Pierre, who was hit with the $34,872 bill from T-Mobile, said she strongly favors the new FCC rules to alert consumers about excessive charges.

T-Mobile later reduced Pierre's bill to about $5,000 after she complained, according to letters and bills sent to CNN by Pierre, but she said she is still unable to pay that amount and may file a formal legal complaint.

The FCC said it has been working with Pierre to resolve the issue.

In a statement e-mailed to CNN, a T-Mobile spokeswoman confirmed the company offered voice service and free voice roaming to people in Haiti in the aftermath of the earthquake but did not offer free text or data.

In addition, the spokeswoman said, T-Mobile "donated millions of dollars in handsets and equipment to the relief effort."

"Despite the fact that data and text services were never provided for free, we forgave more than $34,000 of Ms. Pierre's data and text usage on Ms. Destima's account as a courtesy," the statement said, referring to the friend's account Pierre had been using from Haiti. Pierre said she wasn't able to set up phone service from within that Caribbean country, so she had a friend take care of the transactions with T-Mobile from the United States.

Pierre, who was in Haiti during the January 12 earthquake because she was visiting her pregnant sister, said the excessive bill made it appear T-Mobile wanted to profit from earthquake victims.

She said she was initially grateful to the company for agreeing to waive the cost of her mobile phone while she was in the country and working with a nonprofit group, Color of Hope, to promote Haiti's recovery.

And since her $60-per-month plan in the U.S. normally included voice calls as well as mobile data and text messages, she assumed the same applied to the courtesy plan she had been granted.

"We saw it as a really good gesture to the people in Haiti," she said of the courtesy plan, adding: "In the future, I guess I really want to let them know that if they want to do something nice they have to just be kind -- not make profit.

"You can mislead people easily when people are vulnerable."