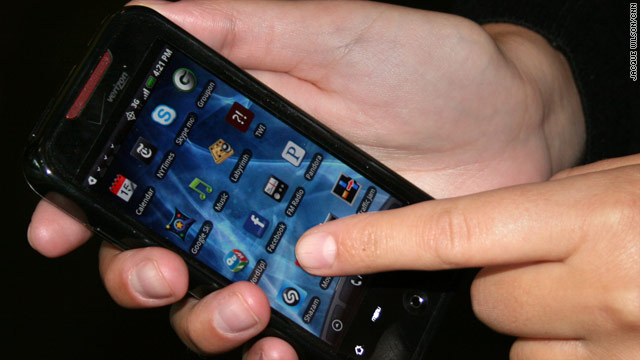 (CNN) -- BlackBerry, Droid, iPhone -- no matter which smartphone you have, it's the apps, not the features, that make your phone unique.

These little applications are customized programs that help run your life when you're on the go. They can help you with everything from counting calories to checking Facebook to finding a good happy hour.

"Without my phone and apps, I certainly wouldn't be able to do some of the things I do now, especially when it comes to travel and work," said Microsoft employee Craig Parker while visiting Atlanta for a recent conference.

"Users love apps," said Sascha Segan, lead mobile analyst for PCMag.com. "Apps are one of the things that propelled the iPhone to such success. You can customize your phone to do anything -- it really is a little computer in your hand."

Apple's online App Store leads the pack with more than 200,000 apps, followed by Google's Android store, at around 60,000, and BlackBerry's App World.

"You can't really think in terms of thousands, because how many thousands of those apps are not worth anything?" he says. "But there are enough good apps for every kind of smartphone out there."

Even better, many of these are free. PCMag.com recently published its list of Top 100 free smartphone apps -- a group that includes applications for lesser-used operating systems such as Palm webOS and Windows Mobile as well as BlackBerry, Android and Apple devices.

"It used be that if you had a phone and you wanted new features, you had to go get a new phone," Segan says. "That's not true any longer. Now you can just download an app, and your phone stays fresh."

With PCMag.com's list in mind, we asked Segan and other smartphone users to talk about their favorite mobile apps.

Here are some of their choices:

SPB TV -- PCMag.com's top pick for Windows Mobile allows you to stream TV channels on your Windows phone. You won't pick up HBO or CNN, but you get a lot of interesting video and foreign channels.

Viigo -- This app, available for multiple mobile systems, combines news from your favorite websites with social-networking features such as Twitter updates.

"This app is so awesome that RIM, the BlackBerry company ... [is] going to make it part of the BlackBerry platform," Segan says. "It delivers you all sorts of information from the internet in a really smooth way."

Slacker Radio -- Like the better-known Pandora, this app will turn your Android phone, BlackBerry or iPhone into a customizable radio station. It's free, but for a $5 monthly subscription, it also offers "station caching," which lets you listen to music while you're offline and saves battery life.

Taneka Johnson of Atlanta says Slacker Radio is her favorite free app. "Unlike some of the other internet radio apps, where they only have 700,000 songs, Slacker Radio has four million and unlimited use," she says.

"If you go to certain websites on your Android phone, they come in as stripped down cell phone versions," says Segan, who praises Dolphin for letting you see the full-screen version of the site.

Opera Mini web browser -- Opera Mini made headlines in April when Apple, in a surprise move, made it available to iPhone users as a downloadable alternative to its mobile Safari browser. Segan says Opera is much faster than Safari if your AT&T connection is lacking.

Dragon Dictation -- This voice-command app allows iPhone users to dictate messages or other verbal commands into their phone, which then convert them to text. The accuracy rate is surprisingly high, although proper nouns and mumbling will give it problems.

Bonsai Blast -- This puzzle-action game, recommended by PCMag.com, requires players to shoot colored balls through chutes and trails. Available for Android and the iPhone.

And finally, there's Facebook's app -- newly upgraded for Android -- which is a no-brainer if you spend any time on the social-networking site. A streamlined version of Facebook's site, the app lets you view your news feed, post status updates and send messages to friends. Facebook is one of Parker's favorite free apps, and it's also PCMag.com's pick for Android, BlackBerry, the iPhone and Windows Mobile.

So what will the app of the future look like? In some cases, like sophisticated video games, Segan says. "You're going to see richer, more 3D, more immersive game experiences. Games are going to start feeling a lot more like they do on the PC or PlayStation."

He says many apps will have social experiences built into them.

"Social networking experiences are going to be a big part of apps in the future," he says. "You're going to see almost every app having some kind of button letting you connect with your friends or see what your friends are doing."