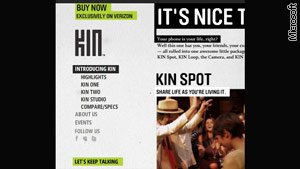 (CNN) -- At the end of June, after much hype and a major mass-media ad campaign, Microsoft pulled the plug on KIN, its family of semi-smartphones.

The KIN's abrupt demise came just six weeks after the launch of that product line.

Now Verizon Wireless -- which sold the KIN, along with fairly pricey data plans for it -- is reportedly returning all unsold KIN units to Microsoft. This is the tech equivalent of "ashes to ashes, dust to dust."

But all is not lost! I was amused when I visited the official Kin website Wednesday evening to find that the KIN marketing campaign is still alive and well.

Of course, if you click "buy now," you get taken to the home page of Verizon Wireless -- which now bears no mention of the KIN.