Forests size of Russia 'could be restored' 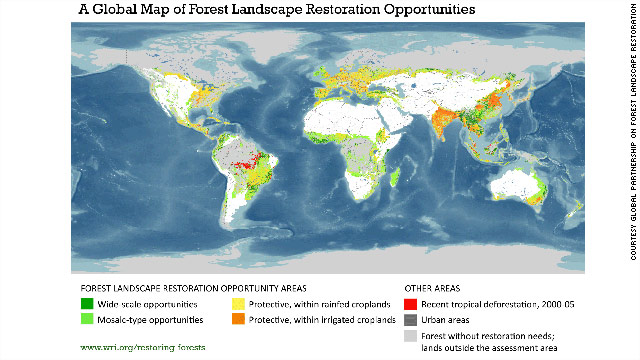 Potential areas for reforestation. Yellow and orange "protective" areas indicate where patches of forest could be used around waterways and fields to protect them.
STORY HIGHLIGHTS

London (CNN) -- Forests covering an area almost the size of Russia could be restored around the world, according to a global partnership of scientists.

The researchers, including the International Union for Conservation of Nature (IUCN), have drawn up a world map showing 1.5 billion hectares where there are opportunities to replant degraded or cleared forests.

Carole Saint-Laurent, IUCN's senior forest policy advisor, said: "There's no one-size-fits-all blueprint. The restoration would need to be driven by the community needs in each area.

"We know it can be done. There are people all over the world who are doing it already."

The restoration would need to be driven by the community needs in each area.
--Carole Saint-Laurent, IUCN senior forest policy advisor
RELATED TOPICS

Three quarters of the world's forests have been cleared, degraded or fragmented due to human activity, while a third have disappeared altogether, according to IUCN.

However, as forests fulfill needs for food, fuel and timber, restoring them can benefit communities as well as the environment, the organization said.

The map was drawn up by the World Resources Institute, South Dakota University and IUCN, for the Global Partnership on Forest Landscape Restoration ahead of the launch of the United Nations International Year of Forests 2011.

Saint-Laurent said: "This study came out of a partnership with about 30 governments all over the world. We are bringing people who are working on forest restoration together, as well as increasing understanding of the contribution that forest landscape restoration can make in addressing climate change.

Saint-Laurent added: "So far this is all at a global level, but our next step is to apply this to individual countries to give a more detailed picture."

The map was created using information on areas that were once forest and have the potential to be re-grown, according to Saint-Laurent. The researchers excluded areas that are now urban or crop land.

However, they still need to look in more detail to determine exactly where it is feasible to re-grow forest.

"These are 1.5 billion hectares where opportunities could be found," said Saint-Laurent. "More analysis needs to be carried out to find what's really possible within that, because we haven't been able to map land rights, and there might be areas that are not suitable from a social point of view.

"Even if you took out a third, it's still a vast area and a vast opportunity."

Often, this would be done in small patches between farms or villages, or along corridors to protect waterways or fields.

"We are talking about taking landscapes that are not doing anything for anybody and producing something of value," said Saint-Laurent.

"It can help create livelihoods for communities. There's an increasing groundswell of interest at the moment in forest restoration.

"People are starting to see there's a wonderful opportunity that forests can offer more to people than they already do.

"For example, in an area of Tanzania over a 15-year period significant areas of forest have been restored in small patches around villages and farms.

"It means the women do not need to walk as far to get their firewood for fuel, which has significant benefits for families."

"You are accommodating a diversity of land uses in one area."

IUCN said the greatest opportunities for restoring forests were in Africa and Asia, each offering potential for 500 million hectares.

The emphasis on restoring forests would complement work on preventing deforestation in the first place.

"This is not a replacement for protecting native primary forests, but it's an add-on," said Saint-Laurent. "We need to protect forests, but also put something back where they have been degraded.

"Over a 30-year-period we believe this could have as much benefit as avoided deforestation."