Will tech be the end of ownership? 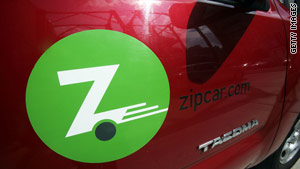 Zipcar is a company that effectively uses technology to help people make better use of their stuff, says Lisa Gansky.
STORY HIGHLIGHTS

Camden, Maine (CNN) -- Can gadgets help us own less stuff?

Yes, says internet entrepreneur Lisa Gansky, author of the book "The Mesh: Why the Future of Business is Sharing."

Mobile phones and social networks are connecting people with unused stuff in ways never before seen, Gansky said at the PopTech conference, an annual event focused on new ideas in innovation, social change and technology.

These connections make it easier for us to share stuff like DVDs, clothes and cars, instead of owning them outright.

"If we think of things like Netflix and Pandora, we have in the last 10 years really shifted our relationship. We have a much greater access to music and film, for example, by not owning it. There are whole generations and cultures of people who may well skip over ownership all together."

Zipcar, a company that lets people share car ownership, is a prominent example of this trend. Zipcar uses technology to track the location of its cars, information about driver timeliness in returning vehicles, the cleanliness of each car, and the most efficient place for each to get cleaned.

This enables people to share an item they otherwise would spend a substantial amount of their income on, but use for a very small portion of their day.

For that reason, other "peer-to-peer" car sharing companies -- like RelayRides, WhipCar and Spride Share -- have popped up to enable these kinds of connections.

To make the sharing easier, people need to know where their neighbors' cars are and when they're available for shared use, she said.

"We already have a lot of stuff," she said.

The question now is, "How do we use what we have effectively?"

Location technology may be part of the answer.