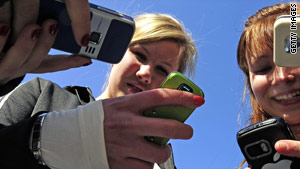 (CNN) -- Think you need to buy a new phone to get better battery life?

Maybe not, if researchers get their way.

A handful of universities and research labs are working on simple changes to Wi-Fi technology that they say would result in your mobile phone battery lasting two to five times as long as it does today.

These changes often don't require new equipment -- just simple upgrades to the software that controls how Wi-Fi routers send data to and from your cell phone or laptop.

The ideas, which go by fun names such as NAPman and Catnap, essentially help your phone sleep more often, so it's only using power to grab data from the internet when it's absolutely necessary.

"Battery capacity isn't keeping up with the rest of the technology," said Eric Rozner, a computer science doctoral student at the University of Texas at Austin, who recently authored a paper on NAPman software. "We're seeing the number of transistors on a chip increase much faster than battery capacity increases, so we have to do smart things to ensure that our phones aren't going to last a few hours or less."

He added, "We're becoming increasingly dependent on these phones."

Researchers said they're trying to update Wi-Fi signals, specifically, because they drain battery power quickly, and because those signals are becoming increasingly available to gadget users -- both in homes, in coffee shops and in other public places.

Wi-Fi signals usually are faster than 3G cellular network connections. They're also more efficient, meaning that you would use less battery power downloading a movie to your phone on Wi-Fi than you would by connecting to a cellular network tower, the researchers said.

But because they're fast, they suck up more power in a short time.

Researchers said these solutions are exciting because they're nearly free to implement and because battery life is a major consumer complaint.

Video: Too much technology?

The problem is particularly pronounced when sending and receiving large amounts of data to, for instance, check e-mail and browse the Web.

These matters seem most pressing for iPhone users since AT&T, the company that offers cell coverage for those phones, has decided to cap the amount of data its customers can use before they have to pay extra. That change, in effect, encourages iPhone users to send and receive data over Wi-Fi networks whenever possible, since they won't be charged for those transmissions.

The just-released iPhone 4 also can make video calls, using a new front-facing camera. But those "Jetsons"-era calls only can be placed over Wi-Fi, not over AT&T's 3G cellular network, which has some problems with dropped signals.

Konstantina Papagiannaki, a senior researcher at Intel Labs in Pittsburgh, Pennsylvania, said that these Wi-Fi software changes are really "semi-solutions" and should be adopted in conjunction with longer-lasting batteries and possibly phone software that makes smartphones more energy-efficient.

But they are nonetheless important, she said. In a test of a software patch called Catnap, which Papagiannaki has worked on in conjunction with Carnegie Mellon University, she said phones using updated Wi-Fi signals lasted two to five times longer than those without.

"If my iPod uses my access point to download stuff from Hulu, its battery would last five times more, simply because we do this smart fix," she said.

Catnap is most effective when the phone is downloading a movie or a website, she said, but probably wouldn't work if you were streaming something from Netflix or Pandora.

Wi-Fi routers may have to be upgraded so that they can tell which mode to use, based on what information is being downloaded, she said.

Rozner's NAPman software fix, which he developed while interning for Microsoft Research, is similar, but works best in public settings where multiple phones are trying to get data from a Wi-Fi hotspot at the same time, he said.

The old way of thinking was to create a data queue of sorts, he said, so phones line up to get their e-mails or websites in the order in which they requested them from the hotspot. But some of those phones, including the iPhone, are set to go to sleep so frequently that they're essentially bumped out of line again and again, which leads to needless battery usage, he said.

"If you put the data at the end of the line -- it's called a transmit queue -- then your phone has to stay awake waiting for all of the other data to be sent," he said.

But they said these ideas could go out to market soon. Papagiannaki said she would be happy for anyone to use her code.

Then we might all plug in our phones a little less often.