How to break into the video-game industry 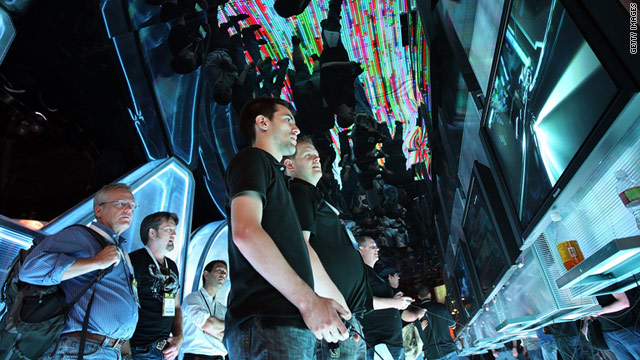 Editor's note: Scott Steinberg is the head of technology and video game consulting firm TechSavvy Global, as well as the founder of GameExec magazine and Game Industry TV. The creator and host of online video series Game Theory, he frequently appears as an on-air technology analyst for ABC, CBS, NBC, Fox and CNN.

Better still, anyone can do it right from home and get started overnight.

But it's not necessarily easy. Leading game companies receive thousands of queries from eager job seekers weekly. Finding ways to catch their attention -- through bold designs, clever Flash games, cool smartphone apps or graphic makeovers for first-person shooter games -- is the secret to standing out.

With hordes competing for the chance to work on smash hits such as "World of Warcraft" or "Call of Duty: Black Ops," it's how you demonstrate your talent to game developers that counts most.

So don't just sit around playing games. Get involved with projects, from apps to books, modifications (mods) to retro remakes, that showcase your creativity.

Whether you're an artist or programmer, designer or marketing maven, the operating rule is show, not tell. Building a portfolio is easy though, thanks to the vast range of free and cost-effective tools offered online. There's also an array of level- and map-making utilities built into many leading games such as "Fallout: New Vegas" and "Torchlight."

Artists should establish a singular style that acts as their personal calling card, then look for ways to gain visibility. Contributing to fan-made game updates such as "King's Quest" reboot "The Silver Lining" and extreme visual makeovers of hits such as "The Elder Scrolls IV: Oblivion" are a great start.

Crafting quirky concepts, including paintings of popular '80s heroes in unlikely situations or free downloadable desktop wallpaper that pays tribute to beloved series such as "Halo" and "The Legend of Zelda," can also work.

Designers and programmers need to create. Small-scale projects such as new maps, missions and scenarios for popular titles make a great starting point. So too, do iPhone apps, homebrew remakes of classic games from the Commodore 64 and IBM-PC, social network games and Flash titles (games designed to run in one's Web browser).

Teach yourself some tools

Software engines such as the Unreal Development Kit, Torque, Adventure Game Studio, Playground SDK, and services such as App Hub can help you get started developing for computers, consoles such as the Xbox 360 or handsets that run on Apple or Windows Phone 7 systems.

To stand out, creations need to be unique and easily comprehensible at a glance.

Focus on building a handful of well-executed features instead of many mediocre ones. And conduct frequent prototyping and testing, since few great ideas are birthed fully formed.

Musicians likewise need a personal calling card, which could be a specific style of music, genre or audio flourish. (Think T-Pain's signature Auto Tune sound which, while annoying, makes him impossible to miss.) In-game creations should also be designed to evoke specific storytelling moods and stand up to multiple plays as adventures progress.

Providing audio scores for amateur and indie game projects is a great way to get one's creations heard. But you can also capture people's attention with offbeat alternatives, such as concept albums inspired by popular titles (e.g. "Halo: The Musical) or downloadable mix-tapes for enjoyment alongside specific games ("Assassin's Creed: The Unofficial Soundtrack").

Want to cover the gaming industry? Would-be journalists and writers should use blogging tools such as WordPress, Blogger and TypePad to instantly start publishing gaming content. Aspiring DJs can hook up USB microphones and free podcast recording programs such as Audacity and create their own radio shows.

Such digital video camcorders as Kodak's Zi8 and the Flip Ultra HD, coupled with YouTube and live streaming services including USTREAM and Justin.tv, let you play online gaming show host as well.

Between fan sites and internet gaming shows, you can collect enough published clips to present to potential employers and possibly even get you a job as a reporter, website manager or TV correspondent.

But to stand out, you'll need to have a singular voice, speak loudly and have something to say that thousands of others aren't already saying.

Marketers and executives lacking technical skills can always find talented development teams or freelancers at sites such as Gamasutra, IGDA.org, GameDev.net and oDesk.com. Online vendors such as Lulu.com, CafePress, MagCloud and CreateSpace also can put you in the publishing business overnight.

Got an idea for a new gaming site? Crowdsourced funding sites IndieGogo and Kickstarter.com even let you present ideas to the public and request donations to get your game projects off the ground.

Finally, though it's crushingly difficult to make a viable career out of professional gaming, circuits such as Major League Gaming and Virgin Gaming do reward skillful players with cash and prizes.

Don't quit your day job, however, unless you live in South Korea.

Spending quality time with hundreds of games does provide vital experience, frames of reference and an innate ability to analyze what makes successful titles so compelling.

But with so many game-industry wannabes competing for so few coveted positions, ultimately it's one's willingness to work, not play, that determines who gets the job.