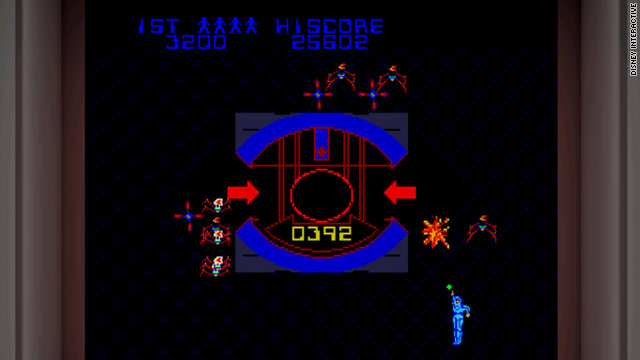 (CNN) -- Long before Lara Croft raided tombs and Jake Gyllenhaal became the prince of Persia, there was "Tron."

Released in 1982, the gaming classic, pitting human against computer in a virtual-world struggle, was the first major arcade game to have a big-screen movie tie-in.

That groundbreaking one-two punch, combined with "Tron's" gameplay wrinkles, which helped inspire other games for years to come, has kept "Tron" in the hearts of old-school gamers and longtime computer geeks for nearly three decades.

With "Tron: Legacy," hitting theaters on Friday and tie-in game "Tron: Evolution" in stores now, those fans have been reflecting on the 1982 game that started it all.

"'Tron' was this odd validation that, the computer stuff, that there was more to it," said Ricardo Torres, editor-in-chief of video-game news site Gamespot. "When I first started getting exposed to computers, it was kind of boring. ... 'Tron' sort of validated my belief, as a kid, that there was something cool about computers that we just weren't getting (yet)."

Manufactured by Bally Midway, "Tron" was designed in conjunction with the production of the 1982 Jeff Bridges movie about a hacker who is transported into a computer and forced to compete in virtual gladiator-like games.

The legacy of "Tron," the movie

(The "E.T.: The Extra-Terrestrial" game was also released for the Atari 2600 in 1982. But there was no arcade version, and development didn't begin until after the wildly popular Steven Spielberg film was released. It also is considered one of the worst video games ever, with Atari reportedly burying millions of unsold copies in a desert landfill.)

"Tron" may also have been the first popular arcade game to feature what would one day be called "mini-games," a staple of today's gaming perhaps most fully realized in the party games for the Nintendo Wii.

While Pac-man always ate dots and Space Invaders behaved mostly the same stage after stage, "Tron" offered four different games based on parts of the movie.

There are the light cycles (arguably "Tron's" most iconic images), battle tanks, a fight with "grid bugs" to get into the movie's Input/Output tower and a game mimicking the movie's final fight at the "Master Control Tower."

Play an online version of the classic "Tron" at Disney's site.

These challenges were an immediate hit with gamers. "Tron" was named Coin-Operated Game of the Year for 1982 by Electronic Games magazine.

A sequel, "Discs of Tron," was released in 1983 and featured the computerized, jai alai-style fight from the movie. It was supposed to be one of the original's mini-games, but couldn't be programmed in time.

John Vignocchi is the development director at Disney Interactive Studios who oversaw the creation of the "Tron: Evolution" games -- which include versions for Xbox 360, PlayStation 3, Windows LIVE and the Nintendo Wii, DS and PSP.

He also worked at Midway for 10 years, where he was mentored by George Gomez, a developer of the original "Tron" game.

"We're dealing with something that was not only revolutionary at that time from a movie-making perspective, but (something) that computer geeks and video-game nerds really embraced," Vignocchi said. "It was validating their passion, their love for gaming, and gaming was so young at the time."

"Tron: Evolution," which plays slightly differently on different gaming platforms, is set in the time between the original movie (and game) and "Tron: Legacy."

The player's character, Anon, is created by Flynn, the Jeff Bridges character from the original film, to help fight a virus infecting his virtual world. The game incorporates drastically updated versions of the original "Tron" games with new challenges.

The original movie and the game's style obviously helped the arcade version of "Tron's" popularity, which initially was greater than the movie's. But even the look of the arcade game's cabinet, which Gomez designed, was key, Vignocchi said.

It featured black lights, fluorescent lines and a glowing joystick for a controller.

"The environment of the arcade at that time -- it was a very dark, happening place with loud music," he said. "Something about that arcade game was mesmerizing and it really resonated with me."

Of course, video game technology in 1982 had its limitations, especially compared to the state-of-the art visuals from the movie.

"I remember being really jazzed about the movie, then going to check out the games and it was like, 'Awwww,' " Torres said. "It didn't quite catch the action and excitement that you were getting in the film, which was kind of the standard.

"These days, I think folks are a little bit luckier because you have moments where a movie game kind of captures something about the film. ... Back then, you had to use your imagination a whole lot."

But enduring fan love for the classic game actually had some impact on the design of the new one, said Vignocchi.

Game designers aimed to make the iconic light cycles handle more like real motorcycles. But when gamers play-tested the feature, they missed the sharp, 90-degree turns players could perform.

It's not just nostalgia. Computing experts said the virtual world that many future hackers began dreaming of because of "Tron" continues to inspire creativity in gaming and beyond.

John West, a special assistant to the director of the U.S. Army Engineer Research and Development Center's information technology lab, said he took inspiration from an odd source -- the movie and game's evil Master Control.

"I'm not much of an evil genius these days, since respectable evil geniuses don't carry diaper bags and pink pacifiers," he said. "(But) the idea of control, and of creating a world over which you could have complete control, was a powerful concept for a geeky 13-year-old freshman in high school."

With the release of gaming tools like the Wii controller and Microsoft Kinect's hands-free game system, he said, the world is still taking small steps toward the immersive, digital world that "Tron" imagines -- one in which complete virtual reality can be experienced.

"'The Matrix,' 'Tron,' even 'Star Trek: TNG,' all have much more sophisticated interaction modalities than we have today," West said. "But as I think about it, we really are starting to see all the right technologies fall into place."