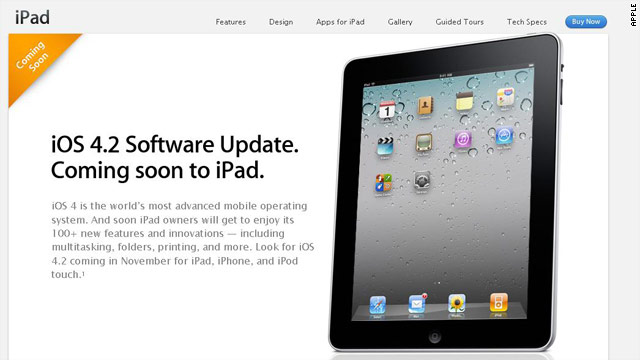 A page on Apple's website promises a software update will bring more than 100 new features to the iPad.
STORY HIGHLIGHTS
RELATED TOPICS

(CNN) -- The iPad will get its first major software upgrade this month when an update to its operating system is rolled out for the tablet computer, according to Apple.

Tagged Tuesday with an orange "coming soon" label, a page on Apple's website said that the upcoming version of the company's operating system for its mobile devices -- iOS 4.2 -- will bring more than 100 new features to the iPad.

Among them, Apple says, will be multi-tasking, or the ability to run multiple apps at the same time. The inability to do so was a common complaint about earlier versions of the operating system.

The system's last upgrade, iOS 4.1, allowed multitasking on the iPhone and other Apple gadgets, but not on the iPad, Apple's touch-screen tablet computer.

Also added will be the ability to organize apps into folders, enhancements to the iPad's email and Web-browsing features and a social-gaming "Game Center" that will let users find opponents or partners to play games with.

The announcement shifts focus back on Apple's slate computer, which was the first tablet-style computer to garner widespread attention and which, along with the iPhone 4, had dominated Apple talk until CEO Steve Jobs rolled out anew line of MacBook Air laptops last month.

The new operating system also will add an Airplay app, which Apple says will let users wirelessly stream videos, music and photos from the iPad to the company's recently enhanced Apple TV system.

The iOS 4.2 operating system already has been shared with developers, but was not yet available to the public as of Tuesday.

Expected enhancements to other Apple devices include improvements to the iPhone 3GS and a Daylight Saving's Time glitch that caused iPhone alarms to not automatically update with last weekend's time change.