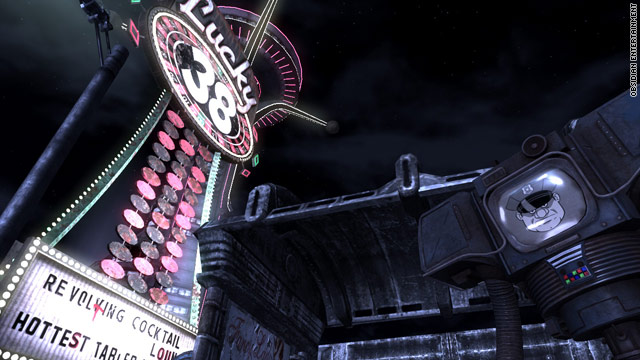 You'll have to fight your way through the desert before hitting the bright lights in "Fallout: New Vegas"
STORY HIGHLIGHTS
RELATED TOPICS

(CNN) -- "Fallout: New Vegas" starts off with a bang -- literally: Your character is shot in the head and buried, still alive, in a grave in the desert.

But that's 23rd-Century life in the post-apocalyptic New West.

The rest of the game is spent tracking down and meting out futuristic justice to the men responsible for scrambling your brain.

"Fallout New Vegas" was developed by Obsidian Entertainment and is not a direct sequel to the main "Fallout" series. It takes place in and around Las Vegas, Nevada, which was spared a direct hit from the nuclear attack that devastated the world during the Great War.

Players will start by traversing the Mojave Wasteland and walking through a lot of desert landscapes and crumbling cityscapes before finally making it to New Vegas and the domain of the mysterious Mr. House.

Two main political and military factions, the New California Republic and Caesar's Legion, are warring over possession of Hoover Dam, the region's only consistent supplier of electricity.

The game-play is very similar to "Fallout 3," even if the story isn't. The Pip-Boy, a personal wrist computer, returns to act as an inventory system and health meter and to keep track of your quests. It will be constantly referenced in nearly everything you do.

The V.A.T.S., or Vault-Tec Assisted Targeting System, is also back, allowing for specific limb, head or torso shots to be delivered with ease. Crouching down during combat also increases the chance of hitting, but definitely limits your ability to flee in the face of a stronger enemy.

Since the area wasn't impacted by a nuclear weapon directly, there are fewer mutants to deal with than there were in "Fallout 3."

Instead, oversized insects and rodents will be your main opponents in the vast wasteland and other humans will be lined up in your sights the rest of the time.

Players can develop good and bad reputations based on actions they take in individual towns or with specific groups of people.

Helping to fight off a group of raiders raises your good reputation in the town, but also decreases your reputation with those raiders who you might meet later.

The impact of your reputation has an effect on how you are treated, what other quests may be available to you and prices on goods and services.

Be prepared to spend a lot of time doing these quests. In addition to helping you build up your levels and your finances, which you will need to enter New Vegas, it also adds to the story and helps flesh out what happened in the region and how the inhabitants are dealing with it.

It was 11 hours of game-play before I had the necessary requirements to cruise the Vegas strip.

There are no cars or other modes of transportation other than your feet. Once you visit a location, fast travel allows you to revisit that same place without spending real-world time walking from one place to another.

But until fast travel kicks in, get ready to see the sights as you walk from location to location, taking up a lot of time and exposing yourself to attacks from animals and raiders.

New to the series is a modification and crafting system that allows players to change how their weapons and ammunition behave during combat. Rates of fire, the amount of ammo in the magazines and damage can be tweaked to fit the player's style of combat.

Items can also be gathered throughout the game and later fashioned into healing powders or items that improve stats and create more potent weapon effects.

Whether you use either is entirely based on how involved you want to get in the game. During the review game-play, there was never a dire need for anything that had to be crafted or modified.

Graphics are pretty much what you'd expect to see from a desert layout. Most of the buildings in the smaller towns are run down, but still standing.

New Vegas lights up nicely at night and shines like a beacon across the wasteland. But there are a few frustrating issues with graphics clipping and items that seem to float in midair for no apparent reason.

Backing out of a firefight and into a door melded my character with the door frame and locked me into place, necessitating a restart. Monster scorpions that chased me across the desert would sometime phase through obstacles in their way -- and no, it isn't one of their abilities.

Tossing dynamite into a crowded room is a good way to clear out enemies. While body parts and various items in the room go flying, not all of them make it back down to earth, instead floating in the air.

There was also an issue that froze the game when I was attempting to target an enemy around a corner. While I could see the enemy and target it, the action would not progress beyond the targeting mechanism and a restart was needed.

"Fallout New Vegas" has a good storyline and a familiar feel if you've played "Fallout 3" before. There are only a few new things to the game-play, but it still works well.

There is a lot to see and do throughout the game and you can spend many hours just exploring all the different regions and locations.

Bugs and graphical issues plague the game in spots, but if you can overlook those instances, you will be rewarded with an exciting time as you make your way to New Vegas and through the adventures that lie within.

Now ... to figure out how to get past those security guards and inside the casinos.

"Fallout New Vegas" is rated M for Mature (blood and gore, intense violence, sexual content, strong language, use of drugs). It is available on the PlayStation 3, Xbox 360 and the PC.