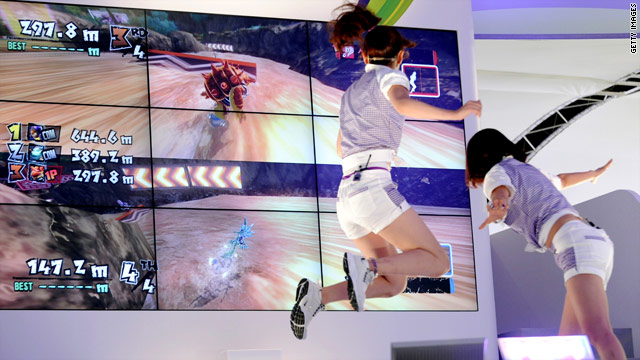 Seventeen Kinect-enabled games will be available when the device makes its debut next month.
STORY HIGHLIGHTS
RELATED TOPICS

(Mashable) -- Microsoft has just announced the 17 games that will be available on launch day with Kinect for Xbox 360, the tech giant's highly anticipated controller-free gaming system.

Kinect, which launches on November 4, is Microsoft's answer to the Nintendo Wii's motion controllers, which helped turn that console into one of this generation's most popular gaming devices.

Both Sony and Microsoft have been playing catch-up with the PlayStation Move and Kinect, respectively.

Seventeen Kinect-enabled games will be available when the device makes its debut next month. Here's the full list:

Kinect Adventures: This is the game that is included with every Kinect device. It helps introduce gamers to the Kinect interface, letting them transverse the rapids, float around in space and challenge their friends to races, among other minigames.

Kinectimals: Think Nintendogs, but with no controller.

Game Party: In Motion: This includes a collection of party minigames like Darts.

Harry Potter and the Deathly Hallows -- Part 1 The Videogame: You can now control Harry's magic with your hands.

Your Shape: Fitness Evolved: A fitness game from Ubisoft that is similar to Wii Fit.

Dance Central: This game, made by the creators of Rock Band, tracks your dance moves. We've heard good things about this one.

The Biggest Loser Ultimate Workout: A game from THQ based on the TV show.

DanceMasters: Konami's version of getting your groove down.

EA SPORTS Active 2: A fitness game with body tracking, heart rate data and the ability to share workout data. EA has gone all-out with this game, which sort of explains its $100 price tag.

Zumba Fitness: See a pattern yet? This is a dance fitness game.

DECA SPORTS FREEDOM: While this game only has 10 sporting events, there is a focus on making it feel as real as possible. Figure skating should be interesting.

Fighters Uncaged: Fulfill your Fight Club fantasy without the bloody concussions and stitches.

What do you think of Kinect's launch day lineup? Let us know in the comments.