What does 'video game' mean, anyway? 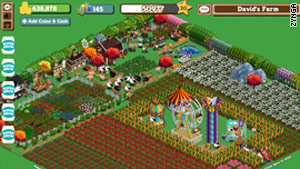 (CNN) -- From plummeting sales to a shift to social networks, critics love to endlessly debate what ails the gaming business.

But ironically, the biggest problem of all may be that there is no singular "games industry" to speak of anymore, and that the term "video game" itself is hopelessly outdated.

"I've never seen a period like this ... there's so much disruption," Electronic Arts founder Trip Hawkins recently said on the online video show "Game Theory." "The industry is really being turned inside out."

Free games playable in your Web browser, electronic amusements based around the sale of bite-sized virtual goods ("microtransactions") and massively multiplayer online worlds are also on the upswing. Simultaneously, tightened household spending is forcing players to look more toward episodic and downloadable content such as new maps, missions and story add-ons that extend the life of games they already own.

Unfortunately for industry titans like Activision and Electronic Arts, most modern forms of electronic entertainment have about as much to do with games like "Call of Duty" and "Mass Effect" as Apple does quilting.

Digital diversions built for new platforms like Facebook and the iPhone aren't just designed to be played in completely different methods and manners. They're meant to be enjoyed in different context and timeframes, and constantly updated and refined based on player feedback, defining them more as services than products.

"A lot of the established players [including] retailers and publishers are worried," said "Oddworld" creator Lorne Lanning. "They have good reason to be. People are finding experiences and products elsewhere, and different businesses are emerging that large infrastructure companies aren't used to adapting to, and a lot of them won't be able to adapt to.

"Anyone who thinks that they're deeply entrenched ... is fooling themselves."

As he explains, it's one thing to sell a copy of "Metroid: Other M," which costs a fixed price, offers everyone essentially the same experience and lasts a few hours before being put down. It's another to build a 3-D online universe such as "Free Realms" or social game such as "FrontierVille," which have to stay relevant for years and offer reasons to keep clicking day after day.

The shift has made for many bleak months of retail software performance. Most recently, sales of games for PlayStation 3, Wii, Xbox 360 and popular handheld consoles slumped a whopping 15 percent to $531 million in June, according to market research firm NPD.

"Everyone was caught figuratively with their pants down," said Epic Games design director Cliff Bleszinski of the shift to online, digital and social alternatives. "Everybody in the industry is still trying to figure out how to make blockbuster games in this day and age."

Independent game designer Clint Hocking, most recently responsible for "Far Cry 2," wholeheartedly agrees with these sentiments. "[Game industry insiders] stood around saying for so long that the game industry is immune to the recession," he said. "But we're not."

Origin and Portalarium founder Richard "Lord British" Garriott predicts a radical shift for the business, citing that those who choose to accept it will flourish, while those who don't are doomed.

But as insiders are all quick to point out, upsides are also plentiful for video game fans.

More than 40,000 games are now available that speak to all ages and interests, and at a broader range of prices than ever, on the iPhone and iPad. Sales of PC digital downloads have either caught up to or surpassed retail purchases as of 2009 as well, depending on which analyst you ask.

"The industry will be healthy, is not headed for doom, and we're entertaining more people in more ways than ever before," said Naughty Dog co-founder Jason Rubin. "But from a profitability standpoint, the [blockbuster] console stuff is not quite working."

At this point, it's a little premature to write the pastime off.

Instead of debating what ails gaming as a whole, maybe we'd do better to take a deeper look at the fundamental changes responsible for these painful upheavals.

Not to mention, that is, wake up and realize that "video games" can't all be lumped into the same single grouping any more, or viewed through the same myopic lens.