'StarCraft II' lives up to 11 years of hype 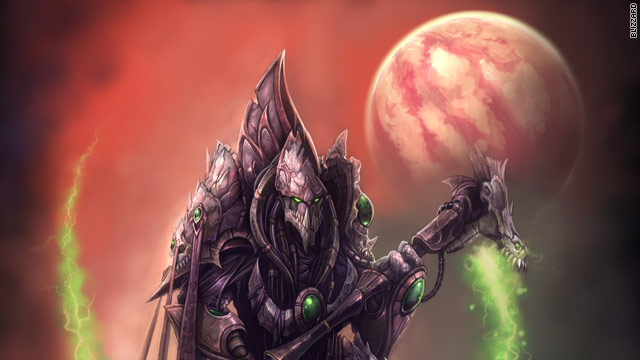 (Wired) -- Few games live up to 11 years of anticipation, but "StarCraft II's" slick upgrades mean the sequel's got a shot.

At midnight July 27, Blizzard switched on the servers for "StarCraft II: Wings of LIberty." The original "StarCraft," released in 1998, became an overnight success, selling 1.5 million copies in its first year on the way to more than 11 million copies sold in its lifetime.

A decade on, the sci-fi game -- which pits human Terrans against alien Zerg and Protoss races in a real-time strategy war that spans the galaxy -- is still revered for its precise balance and easy-to-learn, hard-to-master game mechanics. "StarCraft" became especially popular in South Korea, where professional players can earn upward of $100,000 a year and expert matches get televised nationwide.

At first glance, it seems Blizzard has taken an if-it-ain't-broke approach to "StarCraft II's" gameplay. The biggest improvements to the single-player campaign have been in the presentation.

In the original game, you were simply flung from one mission to the next with nothing but a short mission briefing, or perhaps a brief cinematic scene once in a blue moon. In the sequel, you spend your downtime hanging out inside the spaceship owned by series protagonist Jim Raynor.

Inside Raynor's ship, you can spend the money you make from missions on upgrades for your army. Many upgrades consist of simple stat enhancements, but some unlock new abilities for your units. It's a fun way of introducing RPG elements that provides a tangible feeling of progression.

Another change from the original "StarCraft": You can now choose the order in which you tackle certain missions. It's not as if you have complete freedom: You will usually be presented with two missions to choose from. This means the game follows a branching storyline of sorts, although so far I have always been able to go back and complete missions I skipped.

Optional objectives within the missions themselves range from rescuing oppressed villagers to collecting a number of doodads strewn across the map. This idea is very similar to Blizzard's 2002 game "Warcraft III" (the last real-time strategy game the company released). The rewards are usually worth the trouble. If you rescue hapless villagers, they'll join your ranks. If you collect doodads, you'll be given more money with which to upgrade your units.

Eleven years of technological progress means "StarCraft II's" storytelling methods aren't as primitive as they were in 1998. The first "StarCraft" employed mid-mission dialogue, but the animation was limited to a few pictures of talking heads. "StarCraft II," on the other hand, benefits from the fully rendered cinematic scenes we've come to expect of modern gaming.

These scenes are excellent: The facial expressions, character movement, sound direction and art design all come together to make a gripping plot, at least from what I've seen so far.

It helps that Blizzard boasts some of the best artists in the business. "StarCraft II" might be somewhat low-tech compared to graphics juggernauts like Crysis or Metro 2033, but because of its excellent art direction, it is arguably more visually appealing than either of those games.

"StarCraft II" uses a wide range of colors, and the attention to detail on things like marines' mechanized moving parts or the fluorescent glow of laser beams is spectacular as well.

I haven't yet played "StarCraft II's" final multiplayer mode, but I did play a great deal of the multiplayer beta and came away impressed. Blizzard's overhaul of its classic Battle.net service is geared toward helping strategy newbies become competent, offering an array of challenges designed to teach important multiplayer skills.

"StarCraft II" is a long time coming, and with fans currently caught in the throes of launch ecstasy, it's still too early to tell if it will ultimately prove to be worth the wait. But based on my first impressions, it would have to screw up pretty hard to not be.