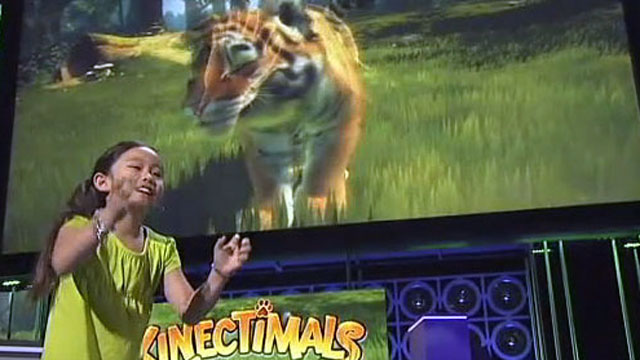 (CNN) -- Microsoft on Monday unveiled the first games for its remote-control-free video game system, Kinect for Xbox 360. Several of the titles were pretty generic: a dancing game, a race car game, an adventure game and a fitness game.

And then there was "Kinectimals."

A demo of this bizarre but cuddly game showed a little girl tickling and playing with "Skittles," a virtual tiger cub. She threw sticks for the tiger to fetch and called it to the screen, where it licked the television and wagged its tail for her.

"Come here Skittles!" she called to her virtual friend.

The game features 40 wild animals and 30 types of interactions, according to Microsoft. Kids just wave their hands and talk to the TV to interact with these virtual pets. Microsoft Kinect, an add-on for the Xbox 360 that goes on sale on November 4, has a camera that watches their movements and a microphone to listen to their voices.

The game has caused a bit of an uproar online, with some bloggers saying it's the start of a new era of kid interaction with video games and others saying the idea of a kid playing with a tiger, virtual or not, is just a little too strange.

"Technically, this game is incredibly impressive. The AI [artificial intelligence] seems extremely reactive and the Kinect set-up works seamlessly as far as we can see," writes Robert Evans in a post on i4unews.com. "That doesn't stop the weird cat-animal thing onscreen from being creepy as hell, though. Hopefully the other Kinectanimals [sic] have less disturbing faces."

Chad Concelmo, from the site destructoid.com, wrote that he was initially skeptical of the game. But then the girl who giving the Kinectimals demo told her pet tiger, "I love you Skittles," and Concelmo writes that his "heart melted."

He continued: "The game is obviously adorable, but it looks to work pretty well! The interaction with the baby tiger seemed accurate and, most importantly, a lot of fun! I am actually looking forward to trying Kinectimals out on the show floor now! Thanks, cute little girl!"

On gameinformer.com, Tim Turi writes that some of the tiger's moves were "disgustingly cute."

"When she jumped, the tiger mimicked her, often to disgustingly cute results," he wrote. "Fetch, jump rope, and playing dead were also among the critter's repertoire. When the two were done playing, surrogate hands appeared on the beast as the girl gave her furry friends a rub down. The tiger responded realistically, folding its ears back, closing its eyes, and moving contentedly."

Here's how Microsoft describes the game in a news release:

"A wide-eyed Bengal Tiger cub cocks its head to the side and playfully peers at you. Memories of your first trip to the zoo come rushing back. 'Kinectimals' invites children, their parents and animal lovers of all ages to build lasting friendships with some of the world's most exotic creatures.

"Just like real pets, your 'Kinectimals' will come running when they hear your voice, respond to commands like 'jump,' 'roll-over' and 'play dead,' and purr with joy when you scratch them behind the ears."

Another user, apparently unable to contain his reaction with words, simply posted a photo of his amused-yet-terrified face during the "Kinectimals" demo.

Take a look at the video demo at the top of this post and let us know what you think. Is "Kinectimals" creepy or cool? Would you let your kid play?