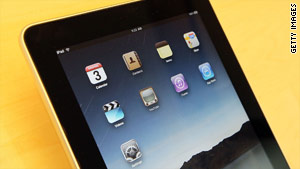 (Mashable) -- According to Apple's latest commercial, "iPad goes anywhere" -- anywhere, that is, except for Yankee Stadium.

Yahoo Sports confirmed with the stadium that the iPad falls under its "no laptops" security policy and patrons won't be able to enter the ballpark with one in their possession.

Say what? The TSA says that you don't have to take an iPad out of its case to go through security, but Yankee Stadium says the device is a no-go?

The discussion surrounding the ban was spurred by a message from Spacekatgal on the IGN Boards. Spacekatgal tried to bring her iPad in to the Yankee/Red Sox game, only to be turned away at the gate.

Undeterred, she did re-enter the stadium with her iPad in her jacket, but the ban exists all the same.

While you can reasonably ask why someone would want to bring an iPad -- or any electronic device aside from a cellphone, for that matter -- into a ballgame, the outright ban of such a device strikes us as odd, especially given that Wi-Fi is available throughout the complex.

In any event, if you want to bring an iPad to Yankee Stadium this summer (assuming you're sitting in the shade), you might want to make sure you've got a bag or windbreaker that can mask said device from the security guards.

Or you could just leave the gadgets at home and watch the game.