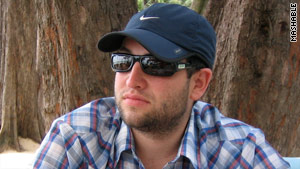 (Mashable) -- By now, landing a job via social media is nothing new; we've perused the how-to guides and heard dozens of great success stories. There are, however, still plenty of creative opportunities for securing a job with a bit of clever online marketing.

Last summer, Alec was just another tired, 28-year-old copywriter at a large international ad agency who wanted nothing more than to work at "a really creative shop for really creative [creative directors]."

"Everybody Googles themselves," Brownstein explained. "Even if they don't admit it. I wanted to invade that secret, egotistical moment when [the creative directors I admired] were most vulnerable."

Since Brownstein was the only person bidding on the names of the five creative directors he most admired, he was able to get the top search spots for a mere 15 cents per click. Whenever someone ran a search for one of the creative directors' names, the following message appeared at the top of the page: "Hey, [creative director's name]: Goooogling [sic] yourself is a lot of fun. Hiring me is fun, too" with a link to Brownstein's website, alecbrownstein.com.

Over the next couple of months, Brownstein received calls from all but one of the creative directors whose names he had purchased. And finally, at the end of the year, he received a job offer from two: Scott Virtrone and Ian Reichenthal of Y&R New York.

The whole campaign cost him $6.

But the rewards for Brownstein's creativity haven't ended there. He has also received awards in the self-promotion category at two major advertising awards shows, The One Show and The Clios.

We asked Brownstein if he has any advice for others trying to land their dream jobs via Internet marketing.

"Don't be afraid to put yourself out there in an interesting way," he said. "The people who you want to work for can't hire you any less than they already are. So shoot for the moon."

We couldn't agree more with his advice. What do you think of Brownstein's story? Have you or anyone you know used online marketing to land yourself a job?