So, how real are robots? 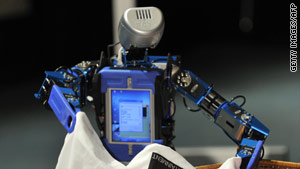 Robots can do all kinds of tasks, from folding clothes to fighting wars. But a professor says we should consider the ethics of unleashing robots.
STORY HIGHLIGHTS
RELATED TOPICS

You won't after a quick chat with Noel Sharkey.

And they're getting more complex all the time.

In a talk this week at the Computer-Human Interaction conference in Atlanta, Georgia, Sharkey said there are more service-oriented robots in the world than industrial bots, which tend to work factory lines and the like.

Plus, they're getting cheaper.

So, even if the only robot in your life is today a vacuuming Roomba, that could change quickly, Sharkey said. South Korea aims to put a robot in every citizen's home by 2013, he said.

In an interview with CNN.com, Sharkey talked about the ethics of this increasingly robot-infused world we live in.

Sharkey: I think the opposite is true, in fact, that people watch science fiction and think how real robots are.

What's real about robots today is they're not intelligent. I quite often say they're not bright enough to be called stupid. They're more like sort of washing machines in many ways.

So, if I send it to seek someone, it could go seek them and kill them. Well, not someone in particular, but it could go and find targets.

Any kind of open-ended thing, or multi-function thing, they're not good at yet. It's difficult to know when that's coming.

CNN: What will be the next advances in robotics?

Sharkey: I'm not sure. One of the advances that really needs to happen is a great development of vision systems. We can do an awful lot with other sensors now, but we're really, really behind with vision systems.

In a lab, you can show it [the robot] something and teach it something. But to actually be able to see something in the real world [is more difficult].

CNN: Can robots distinguish between things, and are there ethical issues that come with their ability to make small decisions?

Sharkey: The big one is being able to tell the difference between a combatant and a civilian, and there's nothing we've got at the moment that can really do that.

Also, I don't really believe there will be in the very near future. Maybe in 100 years time. It's not just a vision problem. Just seeing something is not enough.

A military robot might go out, and if it finds insurgents, it kills them, because there's a rule that's saying 'only kill them if it's an insurgent.'

You have a group of Marines as an example: They were in the battlefield and they were ready to kill insurgents that had come into an alleyway. They had machine guns pointed. And they noticed they [the insurgents] were carrying a coffin.

They lowered their machine guns, took of their helmets as a mark of respect, bowed their heads and let them pass.

Now, a robot would kill them. You could program the robot that if they saw insurgents with a coffin, don't kill them. But then you're going to have every insurgent carrying a coffin. It's as simple as that.

It's a real worry for me, this idea of turning autonomous robots on the population, and it's coming. It's in all the military plans.

CNN: Are there any international laws governing what a country should or shouldn't do with robots?

Sharkey: I'm talking to the military a lot, and what I'm trying to say is 'please discuss this among yourselves,' at least before it leads to this massive proliferation.

Is it going to lead to a robot arms race? There's no international discussion whatsoever.

CNN: What classifies something as a robot?

Sharkey: The thing is the definition changes all the time.

In the 1920s, the first traffic lights in the United States were called 'robots' because they had electric eyes. In Africa, they're still called robots.

It can be remote controls, it can be driven by people. Here's why I have a problem with a definition, because I'm a professor, so I have to be picky about definitions. For me a definition has to be something that defines a robot and only a robot and nothing else.

Every definition I find could apply to a printer, a laser, an alarm clock, a bread machine. And this leads people to say things like 'Oh, my bread machine's a robot.' Well, not quite.

Like I say, we know a robot when we see one.

If it's mobile and it's running around and it's got sensors on it, it's definitely a robot.

CNN: Can people fall in love with robots? Are we already forming attachments to robots?

Sharkey: I don't know about falling in love. The data do show that children are definitely forming emotional attachments with robots, and they attribute mental states to them. But the answer to your question is that people fall in love with rubber dolls, and robots are an awful lot better than that. I don't know. I mean, people say they fall in love with their car. But they don't.

CNN: Would you put your kids in the care of a robot?

Sharkey: Certainly not. Under no circumstances. Because I don't think robots can care for a kid.

My kids have had a lot of exposure to robots throughout their life. They've attended a lot of robot competitions. But for robots to look after them, I think would be very bad for them.

I wouldn't mind robots enabling their education in a social circumstance, with a lot of other kids and teachers -- and having fun with robots.

But not actually sitting in the care of robots. I personally think it will create psychological damage. I'm not talking about a couple of hours here and there. I'm talking about on a regular basis. A robot nanny will certainly create attachment disorders, I think.

CNN: Do you see any role for robots in caring for you as you get older?

Sharkey: I think so. Helping me to the toilet perhaps. If I'm very old and can't look after myself, a robot could guide me out to meet people.

Anything that will maintain my dignity and independence, really, as long as I'm not left exclusively with it. In hard economic times, and with a shrinking young population, what I think you could find is that if a robot is good enough -- and they are getting good -- to look after me a lot, I might just be left with it.

And society can wash their hands and feel good about it. He's being looked after, now.

CNN: Is that happening already? Are robots acting as caregivers?

Sharkey: They're beginning to. I know that there's a big push in Japan now. There's a lot of funding is going into it, but not as any full-time caregiver. They're working with old people in homes.

It's all an ethical trade-off really. You don't want to be in the exclusive care of robots. But if they give you independence, then it's a good thing.

The main thing, really, I think, that needs to be done with this is to actually ask old people what they want. Or -- I'm 61 -- and asking people my age how they want it to go over the next 10 or 20 years is very important.

CNN: Why don't we see mainstream adoption? I can't name friends who are using robots in their homes.

Sharkey: Not even vacuum cleaners?

Sharkey: Yeah, the Roomba's getting around. I've got a Roomba. It's not a very good vacuum cleaner, but it's a really cool robot.

The big inhibitor is expense. They are still really expensive, though prices are really falling. And people are looking to the mass market.

CNN: Are robots used for surveillance?

Sharkey: It's just another form of a security camera, except it can be sent off to investigate. I can see all sorts of scenarios that could be done today. You've got the security camera there. You want to get a close-up? You send in a robot that can look a little bit closer or speak to the person even.

All of these flying ones that can surveil you when you can't know they're there. You can't see them. They're completely invisible. They have high-resolution cameras. They can see everything you do.

CNN: And that's being used now?

Sharkey: Yeah, that's being used now [in England], and it's going to be used in this country, too. It's the FAA [Federal Aviation Administration] that's holding them up, but they're being used to patrol your borders, because there aren't many people living at the boarders and they're not worried about them falling on people. But they will be used, definitely.

I think those are worse than the fixed [cameras] because you can't see them. And that bothers me.

CNN: Are our legal systems behind this robot advance?

Sharkey: Very much so.

I'm not big on the introduction of new laws. I want to see them incorporated into the existing system.

I don't want new laws. I don't want over-regulation, but I would like to see some discussion about where we're going.