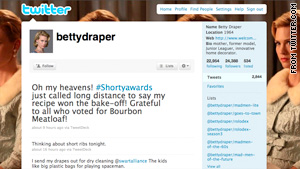 (CNN) -- The hard-boozing characters of "Mad Men" and the Muppets of "Sesame Street" were among the big winners of this year's Shorty Awards, which honor the top micro-bloggers of Twitter.

Betty Draper, a Twitter feed in the voice of "Mad Men's" long-suffering housewife, took top honors in the Innovation category at the awards, which were handed out Tuesday night in New York.

"Oh my heavens! #Shortyawards just called long distance to say my recipe won the bake-off! Grateful to all who voted for Bourbon Meatloaf!" tweeted the writer behind @bettydraper.

In their second year, the awards allowed Twitter users to tweet nominations and then vote on five finalists in categories ranging from art and celebrities to food and finance.

Winners, whether accepting in person at the award ceremony or remotely on their Twitter accounts, were required to give their acceptance speeches in 140 characters or less -- the limit for each post on Twitter.

"A Toast: to Highballs, High Jinks and Advertising. Limit my acceptance speech to 140? Shorty...if you were a woman I'd marry you. Cheers, F"

That was the "speech" by another fictional character inspired by "Mad Men," which follows the cigarette-smoking, whiskey-swilling employees of a 1960s ad firm.

The acceptance-speech limit proved confusing for the Muppet named Grover, who, on the arm of a puppeteer, listed Hamlet, Tarzan and Superman before being told by Sanchez that those were the wrong kind of characters.

The awards come as Twitter is poised to pass a big milestone. Sometime late Thursday -- about 8:15 p.m. ET, according to one estimate -- the site is expected to see its 10 billionth tweet.

The number is a sign of the site's astronomical growth over the past year. Although the total number of Twitter users appears to have flatlined in recent months, those who use the site look to be tweeting more often.

Twitter saw its 1 billionth tweet about a year ago and hit 5 billion tweets about four months ago.

According to a Wednesday night e-mail from Twitter co-founder Biz Stone, the number of Twitter accounts has grown 1,500 percent in the past year.

In the note to users, Stone celebrated not just the site's popularity but the role it played in world events like election protests in Iran and fundraising for earthquake victims in Haiti.

"By working together during critical times when others needed help, sharing important information that otherwise might not make the news, and inventing new and interesting ways to use Twitter, you've shown us that Twitter is more than a triumph of technology -- it is a triumph of humanity," Stone wrote.