Blogging from the Olympics on Microsoft's dime 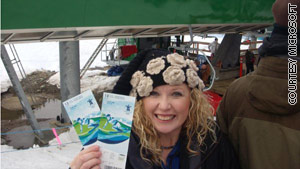 (CNN) -- Forgive Amber Johnson if she knocked you over while sprinting through the Olympic Village near Vancouver, Canada, last week.

She was on her way to blog about skier Bode Miller winning a medal. And as someone who named her 3-year-old son Bode, she didn't want to miss it.

"I'm literally sprinting," said Johnson, who had shown up at the wrong media center for Miller's press conference. "I have these clogs on. I was a disaster, running through the Whistler village yelling at people to get out of the way."

Johnson, a Denver, Colorado, writer and native of Canada whose Crazy Bloggin' Canuck blog focuses on life as a mom of two, was one of two bloggers who have covered the Winter Games in person after winning a contest hosted by Microsoft.

The Olympic Blogathlete contest was designed to showcase Microsoft's Office 2010, currently in beta format, which adds blogging, photo and video tools to the program's traditional spreadsheet and other workplace functions.

But Anthony Sprauve, spokesman for Microsoft Office, said it was also a chance to highlight what he called a different kind of Olympics.

"This is really probably the first real digital Olympics," he said. "A lot of people are obviously still watching on television. But they're watching on the Internet, webcasts, they're following athletes' blogs and Twitter updates.

"They're staying on top of what's going on in real time."

For Dylan Derryberry, the other blogger and a sophomore journalism student at Colorado Mountain College, the trip to Vancouver has been an interesting look at how international journalism works.

"Obviously, this entire experience is an amazing opportunity," he said. "Journalism is constantly moving forward, especially in technology ... and all of this is great for a college student, especially in journalism."

The contest required active and established bloggers to submit writing samples and essays on why they'd like to cover the Games. A panel of judges, including gold medal-winning skater Bonnie Blair, selected five students and five "mom bloggers" as finalists and those 10 campaigned for online votes for the top spot.

Microsoft hooked them up with Olympic-branded Acer Aspire laptops, loaded with Office 2010 and Windows 7, of course, and Windows 6.5 smartphones they used to post to Twitter and their blogs.

Johnson is a Winter Games diehard whose parents met at a curling center in Canada.

Her Olympic highlights have included spending time with Blair as the speedskater watched Apolo Anton Ohno -- who would break her U.S. record for most Winter Olympic medals. She also met the cast of NBC's "Today" show, even though, as she wrote on her blog, "Matt Lauer ruined my moment in the spotlight" by standing in front of her during live shots.

Then there was Wayne Gretzky.

A big hockey fan (who cheers for most U.S. athletes, but is still broken up over Canada's loss to the United States) Johnson was taken off guard when introduced to the hockey legend.

"Did I tell The Great One I still remember when the Oilers beat the Islanders to win the Stanley Cup, their first of five in seven years? Of course not," she wrote in a blog post titled "Tutorial on what not to say when meeting Wayne Gretzky."

"I instead blurted out, 'I have to confess to you I'm a Calgary Flames fan" -- a nod to the Oilers' arch-rival.

Johnson is already back in Denver. Derryberry, whose early highlights include being one of only two U.S. fans watching the aforementioned hockey match in a bar full of rabid Canadians, arrived this week and will be in Vancouver through Sunday's closing ceremonies.