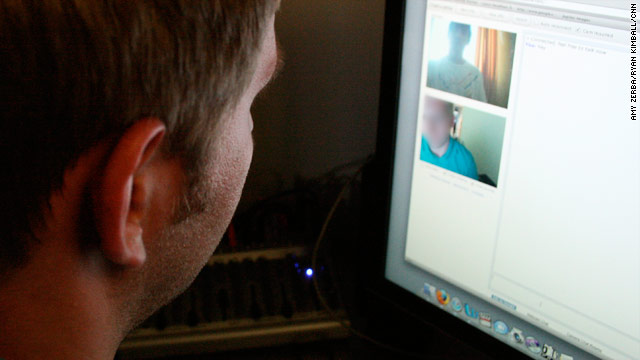 Chatroulette pairs random strangers for video talks, as shown in this photo illustration. Users click "next" to go on to a new chat.
STORY HIGHLIGHTS
RELATED TOPICS

(CNN) -- On Chatroulette, a new and controversial Web site, every click lands you in a face-to-face video conversation with a random stranger.

The setup is simple: Activate your webcam and click "play." Then, as people from all over the world pop up one at a time in a box on your screen, you decide whether or not to chat with them. If you don't like the looks of things, click "next" and the site shuffles you to someone new.

The people you meet could be friendly. During a recent CNN test of the site, a man from France popped up on the screen wearing a jester's hat and telling jokes in French. Two men dressed as skeletons were having a dance party to techno music and flashing lights. A slouched-over man in Tunisia said he was tired because he'd been on the site for four hours.

Two of the first four video chatters randomly selected for CNN by Chatroulette were naked when their pictures appeared. The fifth person simply held a sign up to the screen that read: "Please show me your boobs."

For better or worse, Chatroulette is going viral on the Web in a big way.

Use of the site has grown quickly since it launched in November, and mainstream blogs and media organizations are catching on to the phenomenon. About 35,000 people are on Chatroulette at any given time, according to a traffic count published on the Web site's homepage.

Jason Kottke, a prominent blogger, wrote that Chatroulette "is pretty much the best site going on the Internet right now."

But even the haters seem to agree that the site generates a certain potentially addictive intrigue -- whether it comes from the rush of meeting a new person, or the fear of seeing a stranger who's not wearing any clothes.

The site's hallmark feature is the randomness by which it selects companions for Internet chats. Several online video services such as Skype and Google Chat let people conference through live video feeds on the Web. And online dating services like WooMe use similar features.

But, in all of those instances, people choose who they will talk to -- or at least what kind of person they'd like to chat with.

It [Chatroulette] certainly reminds you that not everyone's like you -- that's for sure. You can look at some freakish things.
--Adam Ostrow, editor of Mashable

On Chatroulette, every interaction is an adventurous gamble. There's no heed to class, race, geography, age, politics or religion. No way to tell who will appear on the other side of the camera.

This stands in contrast to sites like Facebook, Twitter and online dating sites, all of which are organized around existing social networks, creeds, interests or location, said Adam Ostrow, editor-in-chief at the blog Mashable.

"It completely goes outside of your comfort zone," he said. "Especially with Twitter and Facebook, you're used to associating with people who are like you, whereas on Chatroulette ... you come across just random people.

"It certainly reminds you that not everyone's like you -- that's for sure. You can look at some freakish things."

Michael J. Rosenfeld, an associate professor of sociology at Stanford University, said new friendships could come out of these random interactions.

"My guess is that there's a lot of superficial, but that every once in a while people will strike up a friendship," he said. "That's something that's always valuable and important."

He said people increasingly are forming relationships online, as opposed to only using the Internet to deepen friendships with people they already know.

Still, many of the interactions on Chatroulette could be charitably described as fleeting.

In New York magazine, Sam Anderson wrote that after logging onto the site one day he was rejected immediately by the first 18 people he encountered.

"They appeared, one by one, in a box at the top of my screen -- a young Asian man, a high-school-age girl, a guy lying on his side in bed -- and, every time, I'd feel a little flare of excitement," he wrote.

"It started to feel like a social-anxiety nightmare. One guy just stared into the camera and flipped me off. Another stood in front of his computer making wave motions with his hands, refusing to respond to anything I typed."

When CNN tested the site, one man said he had had a meaningful one-hour conversation through the site. But he said that was "rare" for Chatroulette.

According to reports and a firsthand test, the large majority of the site's users are male and overwhelmingly young. Several reports suggest people in their 30s will be mocked on the site for being "old."

A number of memes have emerged among this young Chatroulette crowd since the site launched. Some users dress in costumes, ostensibly to entertain their chat pairs. Others play music and host dance parties.

Some try to horrify people. One roulette camera that has flashed on computer screens repeatedly shows the image of a man who looks to have hanged himself in the back of a room.

Whether Chatroulette will be more than just a bizarre blip on the Internet pop-culture radar is still up for debate.

Ostrow, of Mashable, believes advertisers would not want to be associated with the lewdness of the site.

"I think it's certainly an interesting experiment and I can see kind of why it's catching on," he said. "On the other hand, I don't think it's something that is a sustainable business, obviously, when you look at the content that's on there."

Graham Jones, an author who writes about Internet psychology, said the site will fail because it doesn't work with existing social networks.

But it's hard to say for sure who would be held responsible for any potentially illegal content on the site, and what would be enforced. That's because so many legal jurisdictions could be in play, and because the site chooses video chats randomly, so it may be difficult to prove someone intended to cause harm, or to view illegal images.

"It may raise legal issues for the platform. It may raise them for people that are misusing or abusing the site," he said. "It probably doesn't raise [legal problems] for people who are just going on there to see what's what."

Calo urged Internet users to be cautious about going to Chatroulette.

Parents should keep their kids away from Chatroulette entirely and should restrict their kids' access to webcams in general, said Ernie Allen, president of the National Center for Missing & Exploited Children.

"There's clearly illegal content going on on the site. Exhibitionism, exposure of person is unlawful," he said.

Amar Toorwrites on the site Switched that the smut on Chatroulette and the young people on the site may be its undoing.

"All it takes, really, is one creep to link up with one curious 12-year old, and the site will surely be entangled in a fatal lawsuit," Toor writes.

Some writers have called for Chatroulette to install filters that would let people meet up to talk with people who are interested in certain topics, or who do or do not want to see pornography.

As of yet, the site has few rules. Users are supposed to be at least 16 years old, and they're not supposed to show pornography on the site. A button at the top of the screen lets people flag video chats they find offensive.

None of those restrictions, however, are clearly enforceable. Kids, for instance, do not have to enter birthdates to start chatting on the site, as is the case on some online social networks.

The site is run by a 17-year-old high school student in Russia named Andrey Ternovskiy, according to the New York Times' Bits blog, which interviewed Ternovskiy by e-mail.

In the excerpted Times interview, Ternovskiy says he codes the site himself and is having trouble keeping up with a swelling flood of traffic.

He said he built the site as a game and is not pleased with the "not-very-nice" things some people do with the site.

"Others do really unbelievable things I could never think of," he wrote in the Times interview.

"They make up songs about strangers and sing to them, draw them, listen to music, broadcast them their own music. Two groups of teenagers can party together. That's just great in my opinion. I am glad that I made this project and it is a pleasure for me to work on it."