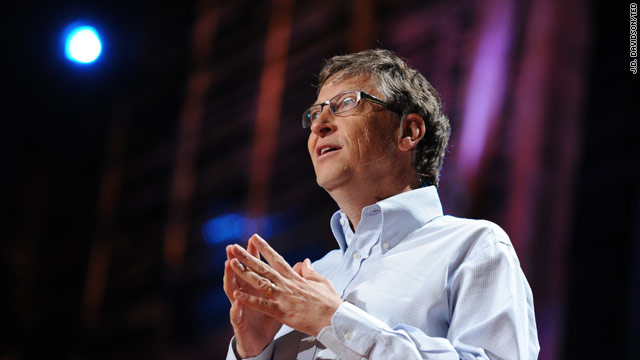 "What we're going to have to do at a global scale is create a new system," Gates said in a speech at the TED Conference in Long Beach, California. "So we need energy miracles."

Gates called climate change the world's most vexing problem, and added that finding a cheap and clean energy source is more important than creating new vaccines and improving farming techniques, causes into which he has invested billion of dollars.

The world must eliminate all of its carbon emissions and cut energy costs in half in order to prevent a climate catastrophe, which will hit the world's poor hardest, he said.

"We have to drive full speed and get a miracle in a pretty tight timeline," he said.

Gates said the deadline for the world to cut all of its carbon emissions is 2050. He suggested that researchers spend the next 20 years inventing and perfecting clean-energy technologies, and then the next 20 years implementing them.

The world's energy portfolio should not include coal or natural gas, he said, and must include carbon capture and storage technology as well as nuclear, wind and both solar photovoltaics and solar thermal power.

"We're going to have to work on each of these five [areas] and we can't give up on any of them because they look daunting," he said. "They all have significant challenges."

Gates spent a significant portion of his speech highlighting nuclear technology that would turn spent uranium -- the 99 percent of uranium rods that aren't burned in current nuclear power plants -- into electricity.

A "traveling wave reactor" would burn uranium waste slowly, meaning a 60-year supply could be added to a reactor at once and then not touched for decades, he said.

"All the batteries we make now could store less than 10 minutes of all the energy [in the world]," he said. "So, in fact, we need a big breakthrough here. Something that's going to be of a factor of 100 better than what we have now."

Gates called for more investment in climate-related technology. He said he is backing a company called TerraPower, which is working on an alternate form of nuclear technology that uses spent fuel.

Money that goes into research and development will pay bigger returns than other investments, he said, especially if money goes into energy sources that will be cheap enough for the developing world to afford.

Clean energy technologies must be installed in poorer countries as they develop, he said.

"You'd be stunned at the ridiculously low costs of innovation," said Gates, who received a standing ovation for his remarks.

If he could wish for anything in the world, Gates said he would not pick the next 50 years' worth of presidents or wish for a miracle vaccine.

He would choose energy that is half as expensive as coal and doesn't warm the planet.