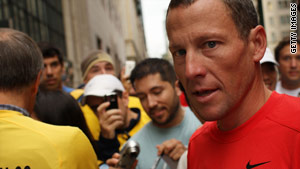 (CNN) -- A day-old fundraising campaign done solely through text messages and made viral on networking sites like Twitter and Facebook has raised more than $5 million for the Red Cross's relief work in Haiti.

"It's shattered any record that we've seen with mobile giving before," said Wendy Harman, social media manager for the Red Cross.

The campaign leads a spate of online efforts that have allowed people to help victims of the earthquake that has devastated the island nation.

At midday Thursday, five of the 10 most popular topics on Twitter were either directly or indirectly related to Haiti -- with "Help Haiti" topping the list.

"Yele haiti now for the disaster," Lohan tweeted on Wednesday, referring to musician Wyclef Jean's online earthquake relief fund. "Please do all that you can. Please." Yele Haiti also has launched a text message fundraising campaign.

The online classified site Craigslist posted a list of relief organizations, including Doctors Without Borders and CARE, along with links via which users can donate.

Multiple Facebook groups related to Haiti had been created by Thursday. One of the largest, Earthquake Haiti, had more than 102,000 members -- similar to the number of members on the Red Cross's page.

Many Facebook users also were changing their status updates to reflect when they'd donated to the Red Cross campaign -- thus encouraging their friends to do likewise.

The attention appeared Wednesday to overwhelm the Web site of Yele Haiti, a Haitian relief organization founded by Jean, who was born in the ravaged country and whose uncle is Haiti's ambassador to the United States.

The $5 million that's been raised so far by the Red Cross far exceeds the nearly $4 million that was donated to all charities by mobile texts in all of 2009, said a spokeswoman for the organization.

Earlier Thursday, when the Red Cross topped $3 million in text and social media donations -- and $10 million from all sources -- for Haiti relief, spokesman Jonathan Aiken described it as "a phenomenal number that's never been achieved before."

"People text up to three times at 10 bucks a pop," Aiken said. "You're talking about roughly 300,000 people actually spontaneously deciding, 'I can spare $10 for this. And that's remarkable."