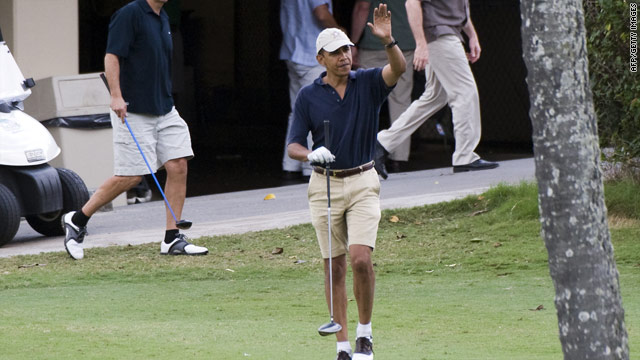 President Barack Obama has played more golf than George Bush did during his entire period in the White House.
STORY HIGHLIGHTS
RELATED TOPICS

(CNN) -- Barack Obama has come in at eighth in a list of golf-playing American presidents, higher than both George Bush and Ronald Reagan.

Bush was known for his love of golf, but figures released by Mark Knoller of CBS Radio, the unofficial White House statistician, have revealed that Obama has played golf 32 times during his presidency -- eight times more than his predecessor did during his entire tenure at the White House.

In fact, president Obama played a round as recently as last Sunday, when his flight to Poland for the funeral of president Lech Kaczynski was cancelled due to the volcanic ash cloud over Europe.

Golf Digest magazine has ranked president Obama ahead of both Bush and Reagan, but behind Bill Clinton -- who was known to practise his putting in the aisle of Air Force One.