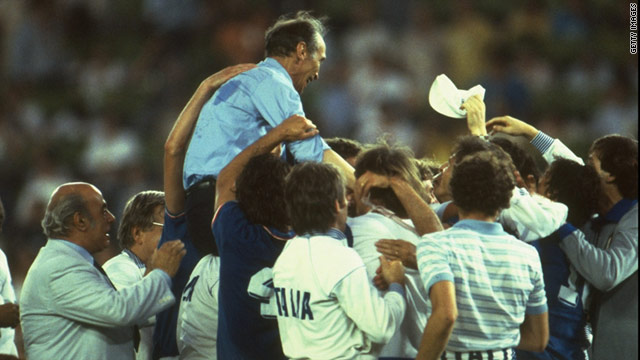 Bearzot, who took charge of the Azzurri in 1977 and enjoyed nine years at the helm, became a national hero when he guided his country to glory in the 1982 competition in Spain, beating the more-fancied Brazil, Argentina and West Germany along the way.

The goals of Paolo Rossi helped lead Italy to a third World Cup triumph, with his hat-trick in the 3-2 victory over tournament favorites Brazil now regarded as one of the most iconic moments in the history of the event.

And Rossi, speaking to Italian news agency Ansa on Tuesday, could not hide his emotion at Bearzot's passing.

"Enzo Bearzot was one of the greatest figures in 20th-century Italy. He was like a father to me. I owe everything to him," Rossi said.

Former Italy and Milan coach Cesare Maldini, who was Bearzot's assistant for many years, told the official AC Milan website: "A great maestro has passed away, not only a maestro in football but in life.

"We worked together from 1980 to 1986 and we lived shoulder to shoulder at the World Cup in Spain. Enzo Bearzot was a well-respected figure both for his results and the way he behaved."

Bearzot was a prominent player for Inter Milan and Torino but really made his mark as a coach, working his way through the national system before being handed the top job.