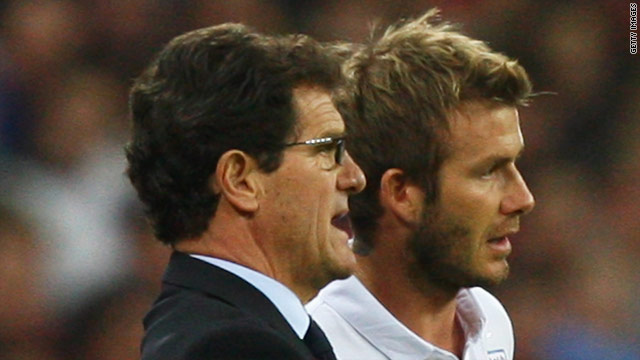 (CNN) -- David Beckham's glittering international career has been brought to an end after England coach Fabio Capello announced his fate in a pre-match television interview.

Capello said the 35-year-old Beckham was now "a little bit old" -- ending the former Manchester United and Real Madrid star's hopes of adding to his 115 caps.

Los Angeles Galaxy midfielder Beckham had hoped to crown his England career with a fourth World Cup finals appearance in South Africa, but was ruled out after suffering a serious Achilles tendon injury in March while on loan with Italian club AC Milan.

He went to South Africa anyway as an ambassador for England's 2018 World Cup bid and as a mentor for the team, watching the matches from the bench alongside Capello.

There has been no discussion of retirement. He will always be available for his country -- when fit and if needed, he will be there
--David Beckham's spokesman
RELATED TOPICS

Beckham may be fit before the end of the American MLS season as he has now returned to light training, but he would not be ready for England's opening Euro 2012 qualifiers next month.

"I say thank you very much for helping me at the World Cup, but probably he is a little bit old," Capello told British broadcaster ITV ahead of England's 2-1 friendly win against Hungary in London on Wednesday night.

The 64-year-old then confirmed after the match that he had made the decision without informing Beckham.

"But I think David knows he has no future with the international team because we have to change. We have to see the new players for the future because the age is important for a lot of people, not only for David.

"I hope when David is okay he can play here the last game at Wembley in a friendly to say goodbye and thank you very much to the crowd. I won't be picking him for any more competitive matches."

However, Beckham's spokesman insisted that the player had not made any decision to end his England career, the UK Press Association reported.

"There has been no discussion of retirement. He will always be available for his country -- when fit and if needed, he will be there," the spokesman said in a statement.

Beckham had been tipped as a possible successor to Capello after the Italian's position was in doubt following the team's second-round exit at the World Cup, but he insisted he was not interested in becoming a manager.

Capello, who signed a new contract before the tournament, was given a vote of confidence by the English Football Association -- and subsequently vowed to bring younger players into his squad.

Beckham has previously been axed by Capello while at Real Madrid, but returned to help win the Spanish league title before moving to the United States in 2007.

He won more international caps than any other outfield England player, but is 10 short of the country's record held by goalkeeper Peter Shilton.

Meanwhile, England's win over Hungary featured another incident that highlighted the need for goal-line technology in football.

While England midfielder Frank Lampard had a goal wrongly not awarded against Germany at the World Cup even though it clearly crossed the line, the Hungarians were given a goal that did not appear to go completely over it at Wembley.

Debutant Michael Dawson had vainly attempted to clear the ball, which deflected towards the goal off his teammate Phil Jagielka following the former's earlier error.

England bounced back from the 62nd-minute incident to win with two goals from captain Steven Gerrard -- the first a dipping effort from outside the penalty area, the second a neat dink over the goalkeeper after a clever twist and turn.