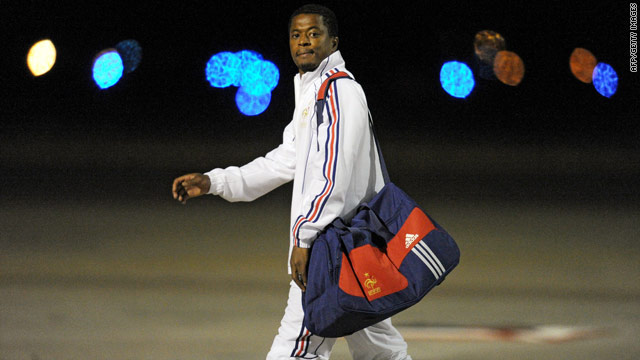 Patrice Evra arrives in Bloemfontein on Monday -- but the French captain was left out of the team on Tuesday.
STORY HIGHLIGHTS

(CNN) -- France's tumultuous World Cup campaign ended in dismal fashion on Tuesday as the former world champions were beaten 2-1 by hosts South Africa in their final group game in Bloemfontein.

Both South African goals came in the first half while French midfielder Yoann Gourcuff was sent off following a clash with MacBeth Sibaya to deal another early blow to France's slim hopes.

French preparations for the match had been overshadowed by an apparent collapse in relations between coach Raymond Domenech and his players, with captain Patrice Evra left out of the side after apparently clashing with Domenech and other coaching staff and officials.

South Africa's win was not enough to prevent them becoming the first World Cup host nation to be eliminated before the tournament's knockout stages, with Mexico advancing alongside group winners Uruguay despite losing 1-0 to the South Americans.

But the real misery was for French fans who saw their team -- traditionally among the strongest national sides in world football -- become one of the first to be eliminated from the World Cup amid turbulent infighting and allegations of treachery.

Evra was then involved in a public training ground dispute with the squad's fitness coach on Sunday and is reported to have led dissent over Anelka's expulsion from the squad, with the entire squad boycotting the training session.

Adding to the confusion, French team director Jean-Louis Valentin then publicly announced his resignation to the media, while French sports minister Roselyne Bachelot has been in France attempting to mediate between Domenech and his players.

But on Monday night Bachelot told journalists the French players had "tarnished the image of France," according to French sports newspaper L'Equipe.

In an indication of the extent to which relations had broken down between Domenech and his squad, the coach on Monday described this players' decision to strike as "unspeakably stupid," and called their actions "an aberration and an imbecility."

"Nobody can behave in such a way in the dressing room or elsewhere and high-level sportsmen and women have to lead by example through football," Domenech told reporters.

"We tried to convince the players that what was happening was irregular, that their actions were unspeakably stupid. I told myself this masquerade had to be stopped. No way would I back this action."

CNN Senior International Correspondent Jim Bittermann in Paris said French fans, pundits and politicians were attempting to outdo each other in their criticism of the French squad.

"It's the image of the French society now, it's a bad example for the youth -- terrible," one Parisian woman told CNN.

"They're paid players. Whatever happened in their team it's not the right time to go on strike," said another.

France's problems at the World Cup had exacerbated long-standing dissatisfaction with the controversial Domenech, who is due to step down as national coach after the tournament to make way for former World Cup-winning defender Laurent Blanc.

France won the World Cup on home soil in 1998 and reached the final under Domenech four years ago in Germany, losing on penalties to Italy after star player Zinedine Zidane was sent off for head butting Italian defender Marco Materazzi.

But France has struggled to replace the Zidane generation, which also won the European Championship in 2000. They only qualified for South Africa by virtue of a tight playoff win over Ireland, sealed with the help of Thierry Henry's handballed assist for William Gallas' goal.

Exit at the group stage in South Africa marks their second successive failure in the opening stages of a major tournament after they crashed out of Euro 2008 without winning a match.