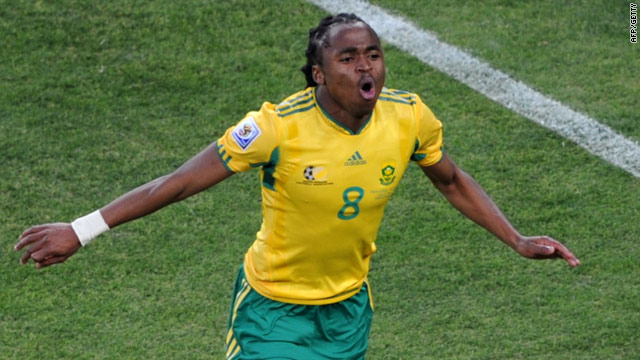 (CNN) -- Mexico's Rafael Marquez denied hosts South Africa victory in the opening match of the 2010 World Cup with a late equalizer in a 1-1 draw in Johannesburg.

Siphiwe Tshabalala's unstoppable 55th minute strike had given South Africa the lead but Barcelona's Marquez netted from close range with 11 minutes remaining of the Group A opener.

There was still time for South African striker Katlego Mphela to outpace two defenders but his left footed shot from an angle hit the post in the very last minute.

The draw extended South Africa's unbeaten run under coach Carlos Alberto Parreira to 13 games but after Tshabalala's goal they had looked set for three points.

The Kaizer Chiefs star was put clear on the left and his shot on the run whistled into the top corner of the net to leave Mexican goalkeeper Oscar Perez clutching thin air.

It was the goal to grace a final let alone the opening match of South Africa 2010 and sent the 84,490 crowd in Soccer City, indeed a whole nation, into a delirious frenzy.

Diary of an armchair football fan

Mexico, who had the better of the first half, almost hit back immediately and the second stunning stop of the match from home goalkeeper Itumeleng Khune preserved South Africa's lead.

Khune had earlier saved Franco's close range effort and was called into action again to tip away a shot from Giovani Dos Santos which was headed for the top corner of the net.

Mexico also had the ball in the net in the first half, but the effort from Arsenal's Carlos Vela was correctly ruled out for offside.

But South Africa were the better side after the break and might have secured a two-goal cushion had Teko Modise not shot weakly at Perez when sent clear.

They were made to pay as slack marking from a cross left Marquez with the opportunity to control smartly and power his shot past Khune.

Parreira said the draw was a fair result after his side's shaky start.

"Mexico are the most daring team in the World Cup and they threatened us early on," he told AFP.

"But I believe we were more balanced in the second half and could have won the game."

France and Uruguay played to a goalless draw in the later Group A match in Cape Town, leaving the hosts top of the group after the first round of games.