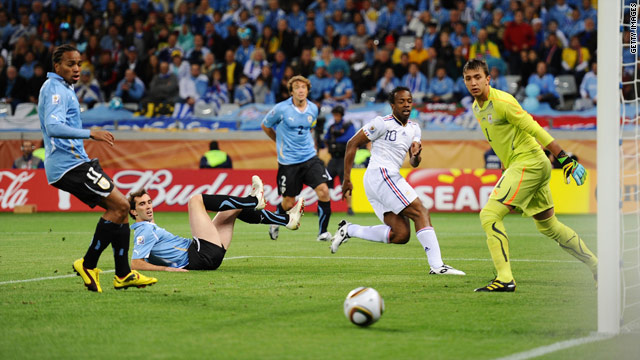 (CNN) -- France and 10-man Uruguay played to a tame goalless draw in their Group A opener in Cape Town on Friday night.

Uruguay were forced to play the last 10 minutes a man light after Nicolas Lodeiro became the first man to be shown a red card at this year's World Cup.

Lodeiro, who had been booked earlier for kicking the ball away, received a second yellow and his marching orders for an ugly lunge at Bakary Sagna.

The result leaves all four teams in the group with one point apiece after hosts South Africa and Mexico drew 1-1 in the tournament opener earlier in the day.

The best chance of the match fell to French striker Sidney Govou after six minutes but he glanced his shot wide after a run and cross by Franck Ribery left him with the goal at his mercy with the right touch.

We really wanted the three points, but I am really proud of the team
--Patrice Evra
RELATED TOPICS

His curling shot in the first half was tipped away by French goalkeeper Hugo Lloris while midway through the second he volleyed wide from a central position.

France could find little inspiration and Chelsea's Nicolas Anelka was well marked in his first appearance in a World Cup match before being substituted by coach Raymond Domenech.

Barcelona star Thierry Henry, who came on for Anelka, and Chelsea's Florent Malouda, reportedly involved in a blazing row with Domenech on Thursday, were both introduced in the second half, but to little effect.

Henry had a chance with a late free kick from a central position, but his effort cannoned into the Uruguay wall.

"We really wanted the three points, but I am really proud of the team," France skipper Patrice Evra told AFP.

"I think we did well. It's the first match. I'm confident for the games ahead. We really deserved to win. Apart from free-kicks, I couldn't see where Uruguay were going to be dangerous."