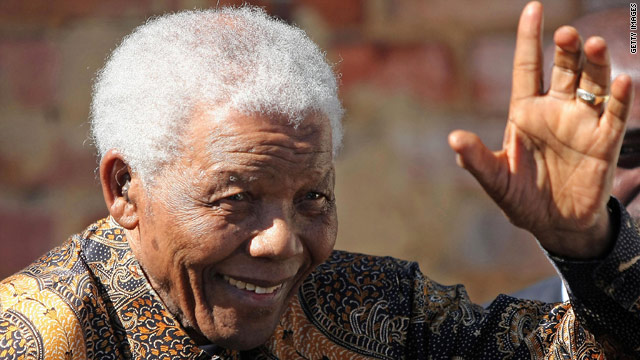 (CNN) -- Former South African president Nelson Mandela will attend the World Cup opening ceremony on Friday, according to his grandson.

Nkosi Mandela said his grandfather would be on hand to greet the crowd at the Soccer City Stadium, but that he wouldn't stay for the entirety of the opening game between South Africa and Mexico.

He told a press conference: "The current discussion is that we afford him time to come in whether it is ten minutes or 15 minutes to walk around the stadium and wave at the crowd.

"But I think to have him sit there an entire 90 minutes of soccer would really impact his state of health because it is winter after all, so we have to guard against that.

"As South Africans we wish him to live for many more years to come."

The 91-year-old played a pivotal role in bringing the World Cup to South Africa but has made limited public appearances recently. However, he did meet the South Africa squad last week.

Nelson Mandela worked hard that we should win the right to host this tournament. We dedicate the World Cup to him.
--Jacob Zuma, South Africa president
RELATED TOPICS

Current president Jacob Zuma paid tribute to Mandela at an event to mark the opening ceremony of the 60th FIFA Congress.

"Nelson Mandela worked hard that we should win the right to host this tournament. We dedicate the World Cup to him," he was quoted as saying by the UK Press Association.

"There are a few moments that define a nation's history. We stand on the threshold of one as we draw closer and closer to Friday, June 11 when the World Cup officially begins.

"What an honour and what a privilege for this 16-year-old democracy. Our country has become a stage for the international community to celebrate humanity, achievement and friendship."

As World Cup fever grows in South Africa, thousands of South Africans poured onto the streets of Johannesburg on Wednesday as the national team paraded through the city.