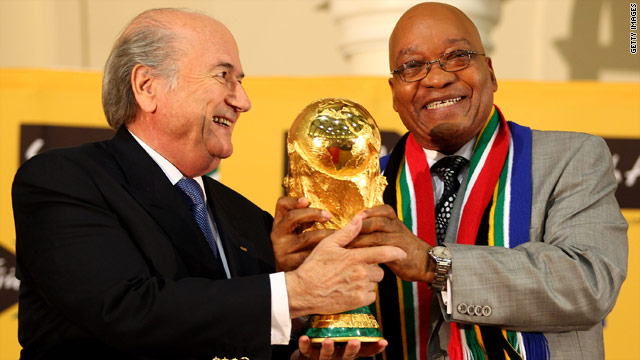 The South African president says football fervor has gripped the nation ahead of the opening on game on Friday, which sees South Africa take on Mexico at the Soccer City Stadium in Johannesburg.

And Zuma is hoping the month-long competition can have the same benefit for the nation as the Rugby World Cup did in 1995.

"The enthusiasm, joy and excitement that has engulfed the entire nation in recent weeks has not been witnessed since president Nelson Mandela was released from prison [in 1990]," Zuma told a press conference.

"The explosion of national pride has been a priceless benefit. It's clear that millions of our people look upon this tournament with hope, pride and sense of belonging.

"The South African flag has become the most popular item on the shopping list of South Africans and this augurs well for our nation-building."

The build-up to the World Cup has been dominated by speculation that the host stadiums may not be completed in time, or that the necessary infrastructure may not be in place, but Zuma has declared the country ready to host one of the world's biggest sporting events.

"We are truly pleased and humbled to host the world in our country for this historical and extraordinary event. South Africa is more than ready. For us the World Cup has already begun."

"At this point it is proper for me to acknowledge and thank our founding president and icon, Nelson Mandela, for his visionary leadership and statesmanship," said Zuma.

"He also worked hard personally to bring us to this glorious moment. He would love to be there. Whether he will be there on the day depends entirely on the former president..

"If he did not appear, we would understand. If he is there, it will be a bonus for this tournament. We wish he would be there."