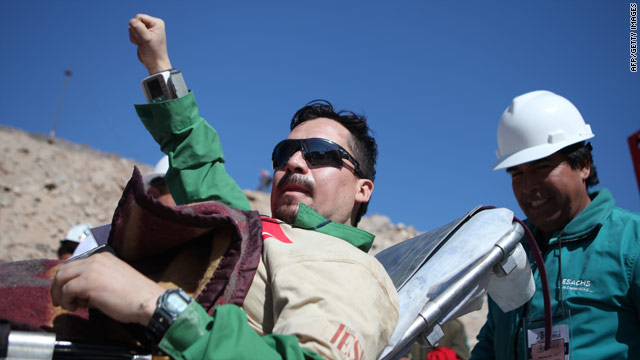 The New York City Road Runners Club invited Edison Pena to watch the marathon on Sunday, but he wants to run in it.
STORY HIGHLIGHTS

New York (CNN) -- Less than one month after being rescued, one of the now-famous Chilean miners will compete in the New York City Marathon Sunday, according to Mary Wittenberg, president of the New York City Road Runners Club.

Edison Pena, 34, was originally invited by the club, which organizes the annual marathon, to attend the event as a spectator. But Pena insisted on running in the 26.2-mile marathon, Wittenberg said.

Pena earned the nickname "the runner" for jogging through one of the mine's tunnels, but he was eventually forced to stop after rocks began to fall along his route.

"He had the fortitude to take the time and run when in what most would describe as a pretty scary situation," Wittenberg told CNN.

"To be out there whether running or walking is such an affirmation of the human spirit," she said of the marathon.

Wittenberg said Pena will be traveling to New York with his wife.

The 12th miner to be rescued, Pena is a diehard Elvis Presley fan who, despite speaking little English, knows most of the words to Elvis classics and led the trapped miners in sing-alongs during their 69-day ordeal underground.