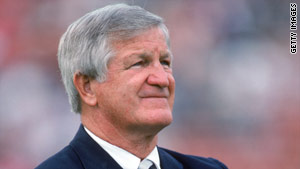 (CNN) -- Pro Football Hall of Famer George Blanda, who racked up more than 2,000 points in a record 26-year career, has died at age 83, the Oakland Raiders announced Monday.

A quarterback who doubled as a placekicker, Blanda retired in 1975 at age 48. During stints with the Raiders, the Chicago Bears, Baltimore Colts and the Houston Oilers, he scored a then-record 2,002 points, including 236 touchdown passes.

Blanda died after a brief illness, the Pro Football Hall of Fame announced.

Blanda was the NFL Player of the Year in 1970, the season that a string of last-minute touchdown passes or field goals led to a string of Raiders wins and one tie in five straight games. Raiders owner Al Davis, a personal friend, once called him "the greatest clutch player the game of pro football has ever known."

"Our heart goes out to his wife Betty and the Blanda family, and we grieve with them for our great friend," the team said.