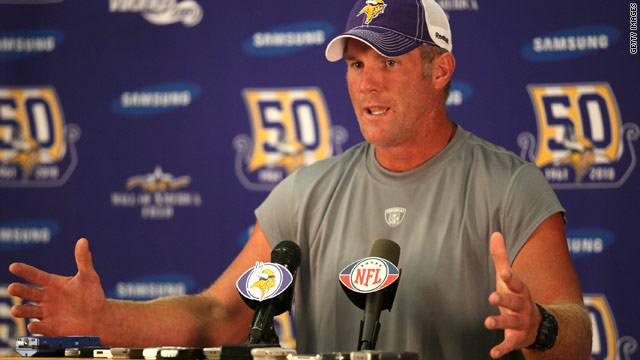 Brett Favre held a special press conference to confirm his plans to play on for another season.
STORY HIGHLIGHTS

(CNN) -- Veteran NFL superstar Brett Favre has promised that this will definitely be his last comeback, having decided to return for one more season with the Minnesota Vikings.

Favre, who turns 41 in October, has previously retired with the Green Bay Packers in March 2008 and in February 2009 with the New York Jets.

But the 11-time Pro-Bowl selection has announced that he will continue for a 20th season with the Vikings following successful ankle surgery.

He is now hoping to win his second Super Bowl title after taking Minnesota to within a match of last year's final, losing in New Orleans as his final throw was intercepted.

It's 20 years and I'm done. This is the last year of my contract. I'm sure a lot of people are like, 'Yes!'
--Brett Favre
RELATED TOPICS

Favre was visited by teammates Jared Allen, Steve Hutchinson and Ryan Longwell this week, and confirmed his return to the Vikings on Wednesday.

"It was very tough, I could make a case for playing and not playing. Ultimately much has made about the three guys coming down, it was really about the team," he told reporters at a press conference.

"When I left New Orleans a big part of me was, I don't want to say done, but the fact we lost that game... It's hard to make people understand.

"The mental toll is what is hard to deal with. This team is a very good football team, the chances here are much greater than other places. From that standpoint it has always made it easier, but answering the bell again...

"My wife always says I look at things more negatively than I should, but the 'what ifs.' I'd love to win the Super Bowl again, but what happens if you don't?"

Favre has been plagued by injuries throughout his career, and said even his latest surgery has not stopped a new spur forming on his ankle.

"There's a little bit of pain there. The fact is it's something I'm going to have to deal with. There's a little bit more range of movement there since the surgery, but we're not talking about a lot. I was hoping to resolve this, but every time you sprain an ankle, mine sprains a little bit easier than it did earlier in my career."

However, Favre is hopeful that he can add to his 1996 Super Bowl triumph, having returned to training on Wednesday.

"I've done it all. There's nothing left for me to prove. I'm here to have fun, help these guys win. I really enjoy this group of guys like you wouldn't believe. I think the feeling is mutual," he said.

"Did I just say that? I do believe it now. I do. I'm going to fall apart sometime."