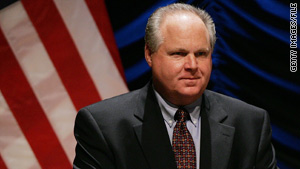 Rush Limbaugh left ESPN in 2003 over comments he made during a discussion about NFL quarterback Donovan McNabb.
STORY HIGHLIGHTS

(CNN) -- George Steinbrenner was a "cracker who made a lot of African-American millionaires," conservative radio host Rush Limbaugh said Tuesday of the New York Yankees owner who died earlier in the day from a heart attack.

"He fired a bunch of white guys as managers left and right," Limbaugh said.

The comments prompted civil rights activist Rev. Al Sharpton to rebuke the radio talker, calling his comments "repugnant and offensive whether they were intended to be facetious or tongue and cheek."

"For the last 20 years I have known George Steinbrenner, and we have quarrelled over diversity and community programs, but I always found him fair, direct, and genuinely prone to do what he felt was right," Sharpton said, adding that Limbaugh owed the Steinbrenner family an apology "that the first day of their mourning to have to be subjected to this type of rhetoric."

Premiere Radio Networks, which broadcast Limbaugh's show, has not responded to requests for comment.

It's not the first time Limbaugh, sports and race have caused a stir. He resigned from ESPN in 2003 after saying on air that "the media has been very desirous that a black quarterback do well."

"They're interested in black coaches and black quarterbacks doing well," he said during a discussion of Philadelphia Eagles quarterback Donovan McNabb. "I think there's a little hope invested in McNabb, and he got a lot of credit for the performance of his team that he really didn't deserve."

That comment came back to haunt him last year when he joined a consortium that sought to buy the St. Louis Rams. He was ultimately dropped from the group after a firestorm of criticism swarmed around his presence.

Limbaugh has frequently lambasted celebratory dances performed by National Football League players after scoring touchdowns ("a cultural problem ... that has resulted in a total lack of class") and assailed the game itself for its aggressive nature.

"Look, let me put it to you this way: the NFL all too often looks like a game between the Bloods and the Crips without any weapons. There, I said it," he said in 2007.

Limbaugh denies any of his comments are racist.