Medvedev calls for resignations after Russia flops at Winter Olympics 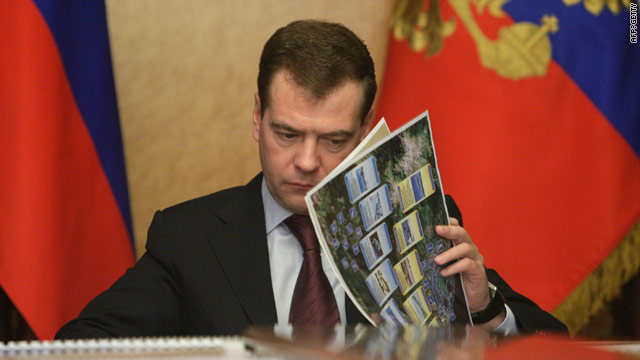 Moscow, Russia (CNN) -- Russian President Dmitry Medvedev called for the resignation of the nation's top Olympic officials Monday after the country's worst performance in a Winter Olympics in nearly a hundred years.

Speaking on state television from his residence outside Moscow, Medvedev put the main blame for Team Russia's failures on sports bureaucrats, whom he called "fat cats," and said the country's sports pyramid should be turned upside down.

Despite infusions of cash, patriotic pep talks and bravado, the Russian team suffered a humiliating blow at the Olympic Winter Games in Vancouver, Canada, coming in 11th with three gold, five silver and seven bronze medals. It was Russia's poorest showing since it began competing in the Winter Olympics in 1912.

"Unprecedented investments are being made in sports in Russia, but money is not everything," Medvedev said.

"We need to think about how we change our training methods. The new training system should focus on athletes who should be put at its cornerstone, not sports federations and their executives -- and not even the trainers, with all our great respect to them. Athletes are those who bring victories, and they should become the focus of our attention."

Medvedev said he will thank the few athletes who won medals at the Olympics and give them government awards.

Russia's poor performance has angered members of the public, who have vented their rage on the Internet.

"It's been a total washout," wrote blogger Valere Pryakhin. "It hurts to see, I should not have watched this. There's no team, just empty talk. Everything's bad ..."

"I'm upset to tears with our Olympic 'successes,'" wrote another blogger.

But problems started early on, and by the end of the first week of the Olympics, the country had won just one bronze medal.

But it was in figure skating and ice hockey -- the two sports where Russia has for decades been an international powerhouse -- that Russia suffered its strongest and most devastating blow.

In figure skating, it was the first time since 1964 that a Soviet or Russian team did not win any gold. And in the hockey quarterfinals, the Russian national team lost to Canada for the first time in half a century of Olympic matchups.

Russia's Olympic performance was a ticking time bomb doomed to explode sooner or later, sports analysts have said. The old Soviet infrastructure is rapidly wearing out, including its once-famous sports machine producing record-breaking performances. Many trainers and promising young athletes went abroad in the 1990s when the country was struggling for its economic survival. Finally, fewer babies were born in the past two decades, creating a generation gap for the sports recruitment system.

"We have been living on Soviet resources for a long time, but that is over now," Medvedev said.

The poor showing caused particular concern because Russia is hosting the next Winter Olympic Games, in the Black Sea resort of Sochi in 2014.

"Each of us had strong negative feelings [about the Vancouver games]," Medvedev said. "But there is no time for grieving. We should stop that and move forward -- the main thing is getting prepared for the 2014 Olympics, and all of our resources should be geared to that."